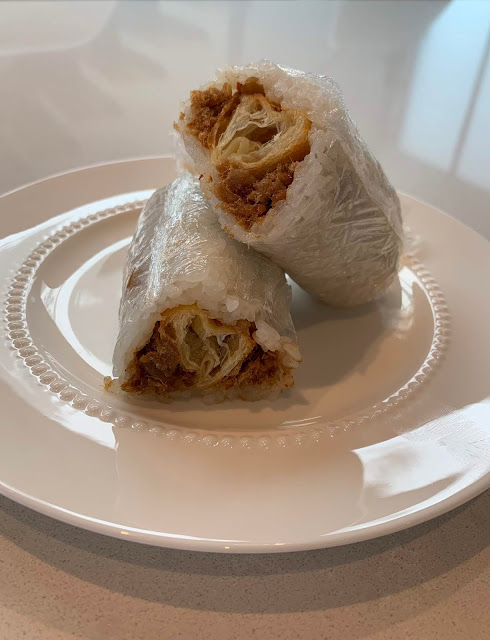 Wow!  It’s been almost exactly one year since I last posted.  That rotisserie duck was just oh so good!  Since then, we’ve made quite a few rotisserie ducks, and I’m telling you, it always turns out great. We have only made one change, the potatoes.  I now roast them in the oven with rendered fat from extra fat and skin trimmed from the uncooked duck.  They are just as delicious, but allows for more control of cooking and crisping of the potatoes.  And oddly, as I type this, I have a duck defrosting in the refrigerator for rotisserie duck later this week.  Kismet.

Well, what’s been happening in the time of covid?  We have been adhering to strict social distancing and are thankful we are all healthy.  I have been going on long walks, listening to podcasts, and starting to experiment more with food.  This time has taught me to conserve, be more careful about how much food I make so as not to waste, and incorporate my leftovers into another meal.  So, I am thankful for that.  I also have an expanding vegetable garden on our roof deck, which the dogs seem to equally enjoy.  It could be they are just interested in the organic fertilizer I use.  This drives Chris crazy as the dogs are always trying to dig their noses in the dirt, making a mess.

One of the podcasts I listen to is David Chang of Momofuku.  I enjoy all his podcasts so much.  He has expanded lately into reviewing bad movies, an Ask Dave podcast and Dad talk.They have been all equally enjoyable.  In one of his “Too Small to Fail” episodes, he talked with Eddie Huang who was in Taipei, and they talked about food Eddie loved.  He brought up fan tuan, or rice balls/rolls, and oh that brought me back to my time in Taipei just after I graduated from college.  Back in the day, you could go out in the morning, and shop a small farmers market with vendors just from your small neighborhood.  Each few square blocks had their own small area where folks were selling vegetables, fish, meat, homemade sauces and various food items from food carts.  It was literally a neighborhood market.  In the morning, food carts would be breakfast items, like steamed dumplings, sweet or salty soy milk, congee perhaps, and fan tuan.  Fan tuan was my favorite.  They would make it in front of you, fresh.  The vendor would be wearing a thick cotton glove, or have a thick cloth on top of which was as sheet of plastic wrap.  They would spread steaming hot sticky rice out, place a fried youtiao (chinese doughnut) in the middle, along with some preserved daikon and dried pork floss.  Then it would be rolled up so that everything was encased in the rice .  It was so good and I honestly have not had one as good since.  It doesn’t stop me from trying.  With such simple ingredients, you’d think it would be easy.  But I think the secret  is the freshness of it and the preserved daikon.  At home, I wouldn’t wake up in the morning and just make one, so I try to make several at a time and reheat, which is just not the same.

Setting aside the inability to create the same experience at home, let’s talk about the preserved daikon.  The pork floss you would buy ready made and the youtiao can also be purchased and baked to come somewhat close to what you could make fresh, especially when wrapped inside the rice.  Now the preserved daikon, I distinctly remember how good that was in the rice roll I had in Taipei.  You can buy a basic salted preserved daikon.  It is not flavored or pickled, it is only dried then preserved with salt.  That is fine to use, but it is not what I had in Taipei.  In one of those markets, you could buy homemade preserved daikon that has been flavored by the vendor.  There was some magic in that daikon I tell you.  So, I always try to doctor the daikon with some a little soy sauce, sugar, sesame oil, and chili crisp. 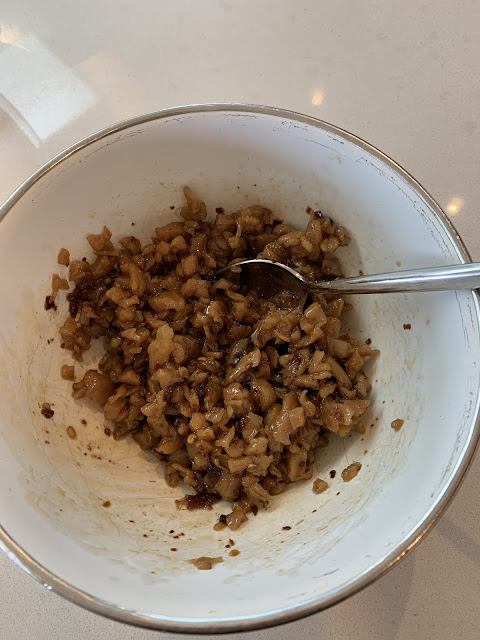 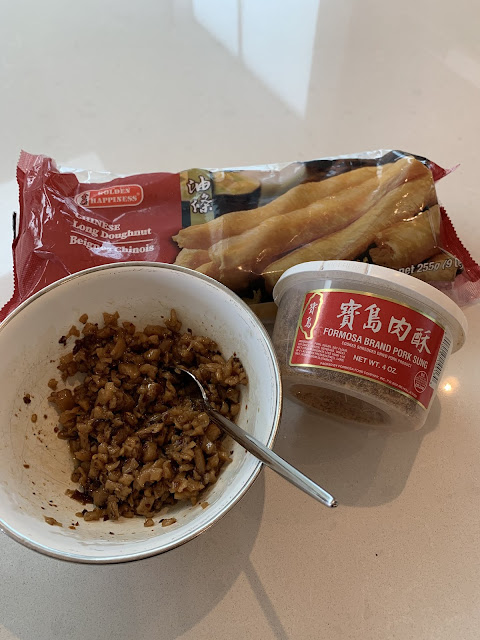 Next the rice.  You’ll want to buy Chinese sticky/sweet rice.  On the podcast, Eddie Huang, who is a chef, said he would fry the rice in oil before cooking it to give it a sheen after it’s cooked. I washed 4 cups of sweet rice, drained it then fried it in a few tablespoons of oil and a pinch of salt for a few minutes.  Don’t brown the rice, the heat should be just enough to lightly sizzle the rice until it soaks up the oil. 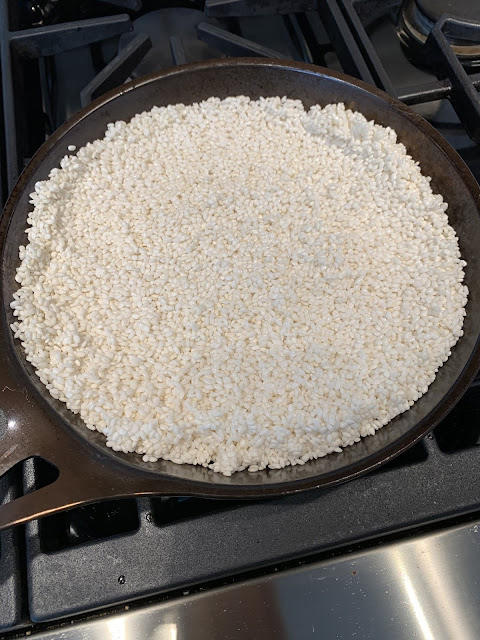 A sidebar on cooking rice.  I am a fan of a rice cooker.  I cook rice at least a few days a week. It cooks perfectly every time and it sits ready to use whenever you are ready to eat.  When using the rice cooker, you must measure your rice using the plastic cup that’s included with the cooker.  One ‘cup’ of rice using that cup is really only ¾ cup in a traditional measuring cup.  There are markings inside the bowl of the rice cooker that tells you how much water to put in.  The fill line is equal to cups of rice you are cooking.  If cooking 4 cups of sweet rice, fill water to the 4 line for sweet rice.  So easy. 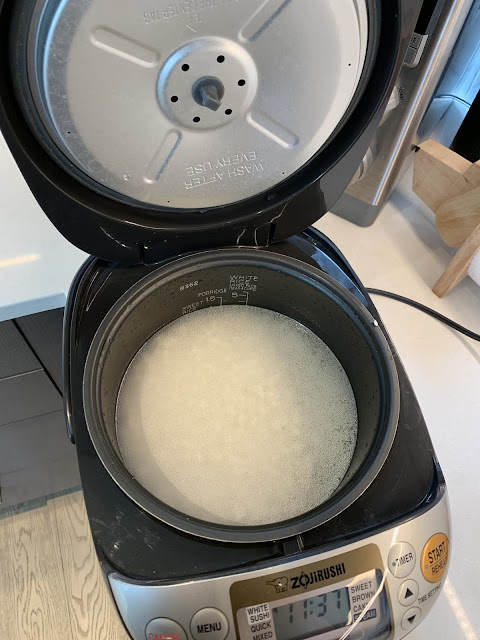 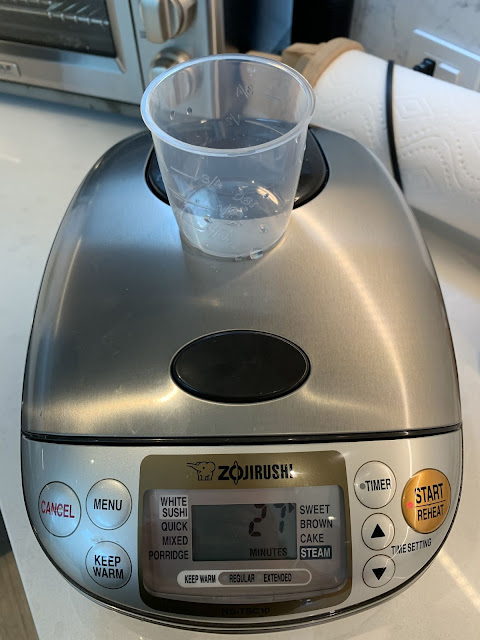 I baked the youtiao for 20 minutes at 375f in the oven.  And now we’re ready to assemble. 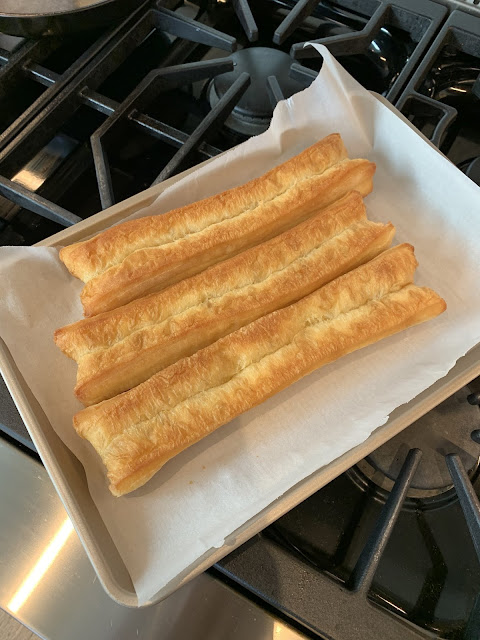 I have not managed to properly roll these in my hand, so I used the help of a sushi roller to get them formed.  Lay out a piece of plastic wrap spread a thin layer of rice out. Spread the rice to the size of roll you want to make.  I had cut each youtiao in half lengthwise and then crosswise.  My rolls turned out to be about 6” long by 2 ¾” wide.  I like a thin layer of rice, so I spread the rice out as thin as possible while it would still hold together.  The expert tip of frying the uncooked rice paid off big time.  It made the rice easier to work with and have a shine to it.  Eddie described it as gibing your rice Botox.

Lay the youtiao in the middle, put a little pork floss on each side and a bit of preserved daikon on top.  Roll it together to encase everything. 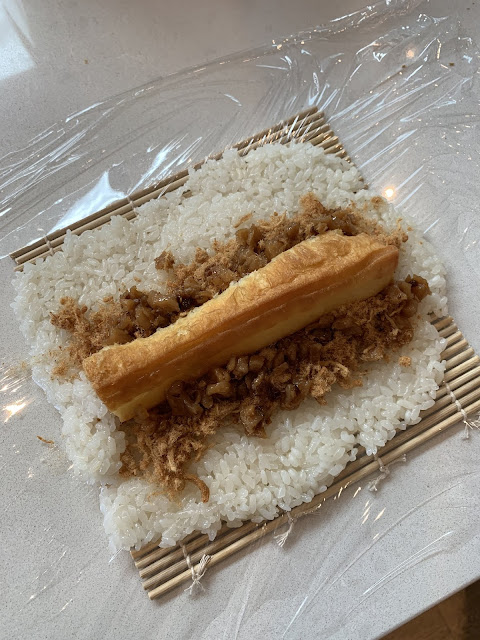 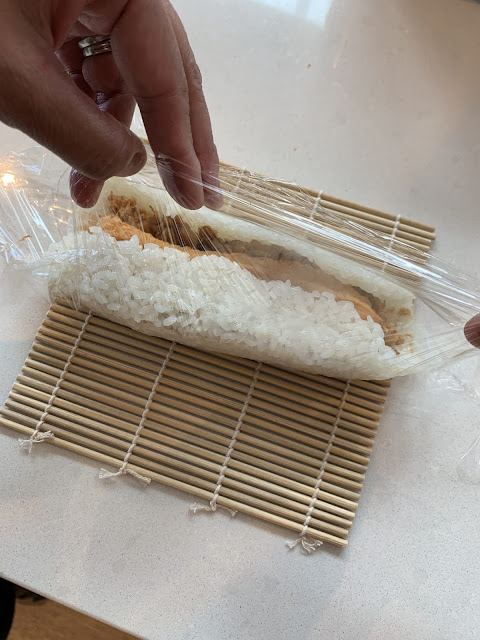 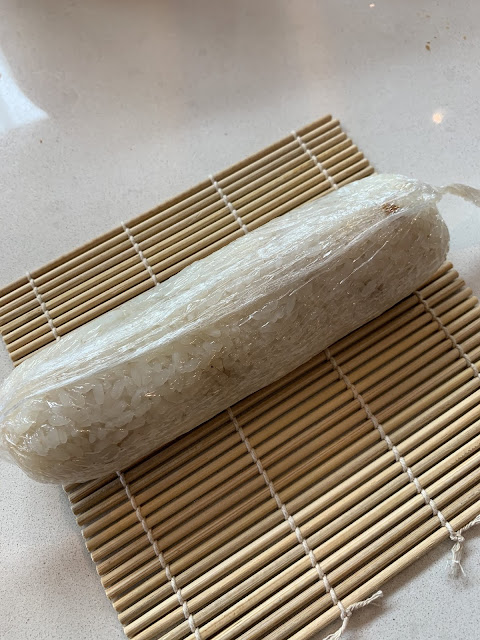 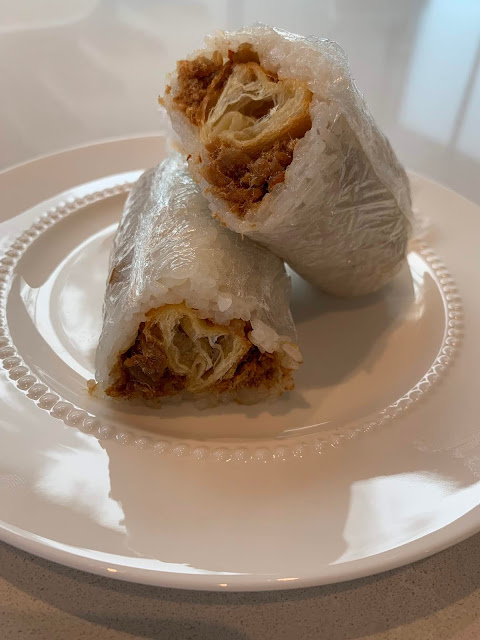 I’d say they turned out pretty well.  Can’t compare to the experience of walking down in the morning to buy a freshly made one, but I’ll take it.  Going to try to pawn some off on Maggie and keep a few and try reheating them tomorrow.