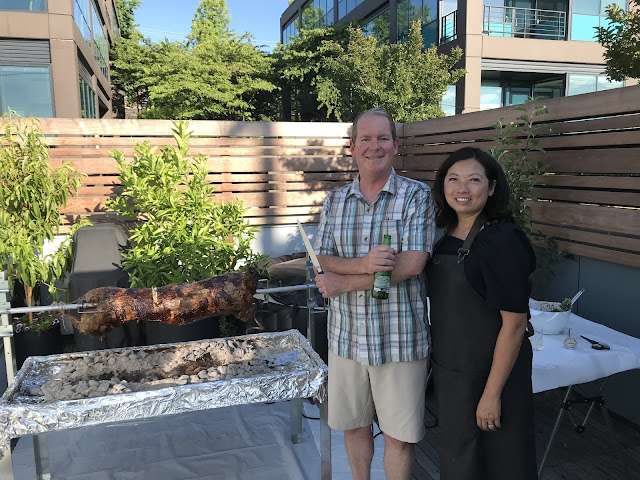 On a warm July day, it was time to roast a whole lamb.  The lamb sandwiches at our neighborhood Greek festival at St. Demetrios has long been a Chris favorite.  This spring, we visited another area festival, Bite of Greece at Assumption Greek Orthodox Church, and had their fantastic lamb sandwiches.  Talking with one of the event’s organizers, we were immediately hooked on the thought of doing our own lamb roast.  Thus began the month’s long pondering, internet surfing, and recon mission on how to set this dream in motion. Based on what we were told, the initial plan was to rent a rotisserie and purchase the lamb at Costco.

Costco carries frozen whole lamb from New Zealand at their Business Centers.  I drove out to the closest one to us and confirmed this was indeed the case.  If you go online, they also ship them to certain parts of the country.  The problem with this was how to defrost the lamb.  I thought of borrowing a super large boat cooler and using ice to slowly defrost it or even putting it in our bathtub with ice.  This caused me a lot of consternation for all that could go wrong, so I continued my search for a fresh lamb.  I contacted Rainshadow Meats, a local butcher. A general lack of response and common courtesy, never mind customer service, pushed me into a different direction. I then called Bob’s Quality Meats, who took my order and had my lamb the following Friday.  A lovely 35 pound lamb.

On the rotisserie spit front, Chris did the research and we decided to purchase a Party Que from Optimal Automatics. I had found that renting one for two days would be equivalent to the cost of purchasing this one. Did we need yet another outdoor grill?  No, we already have three – a Weber Gas, Weber Charcoal and Weber Smoker which also converts to a pizza oven.  A fourth really jeopardizes the aesthetic of our roof deck, if the previous three had not done so already.  We thought, when not in use, the legs could be taken off this one and perhaps it could be concealed behind one of the other grills.

So, lamb, check.  Rotisserie, check.  Date, selected. I had planned to pick up the lamb first thing Friday morning.  I called Bob’s on the Wednesday before just to confirm there were no issues with getting the lamb.  I was reassured all would be well.  On Friday morning I arrived at the butcher and no lamb.  Well, not yet.  10:30, I was assured it would be there by 10:30. Not the end of the world, but now I was already one hour behind schedule.  All the research I had done said it would be five hours to roast the lamb.  We planned to get the lamb on by 11:00am, but then decided 12:00 would still give us enough time should any mishaps occur. We put the lamb in the back seat of my car and I was off.

Back home, I skewered the lamb and used the forks to secure it to the skewer.  I then stuffed the lamb with sea salt and pepper, lemons, onions, garlic cloves, fresh parsley, rosemary and oregano, and bread soaked in red wine and sewed up the belly. 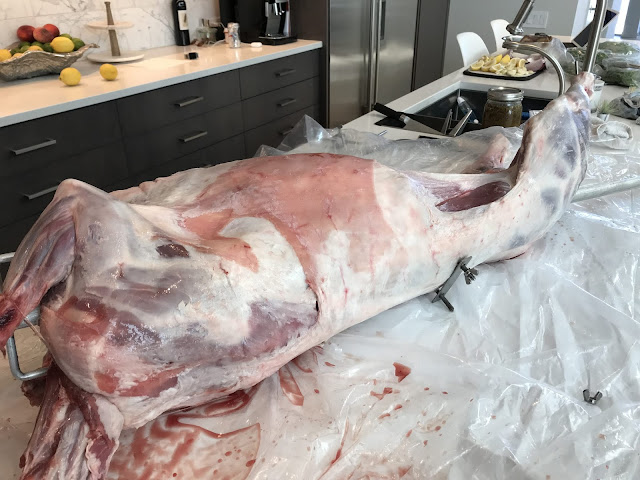 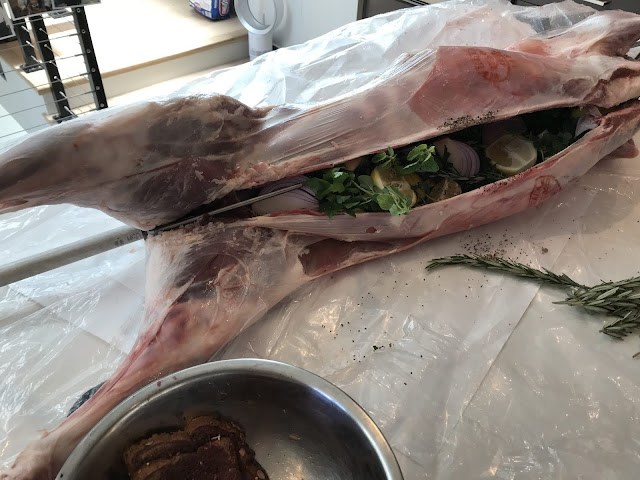 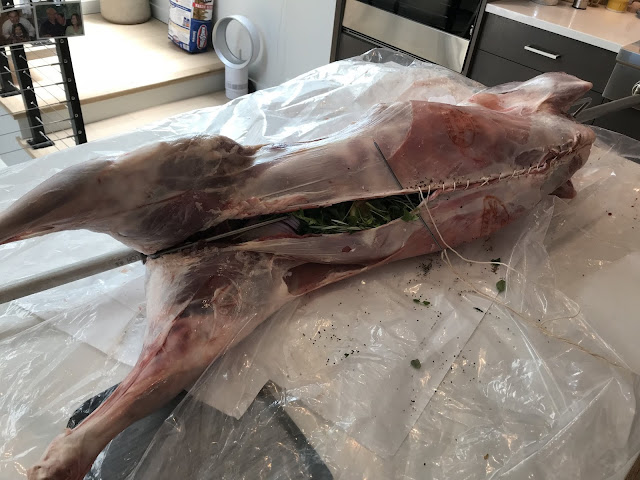 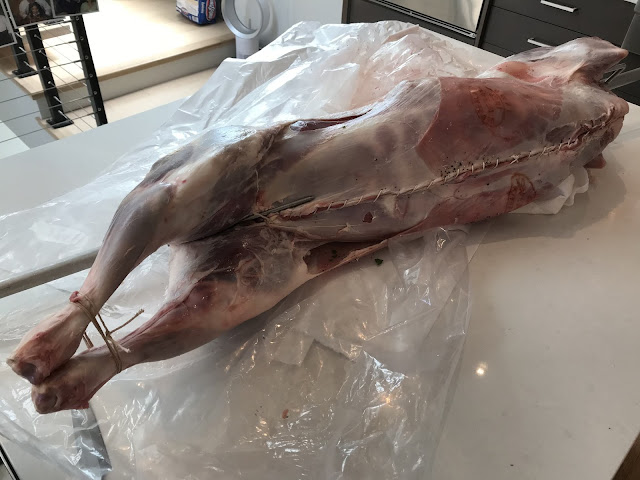 At 12:15, the lamb was ready to go on after a few adjustments with the forks to make sure the lamb would not move around on the skewer.  Chris and I carried the lamb, each holding one end of the skewer, up the stairs and onto the deck. 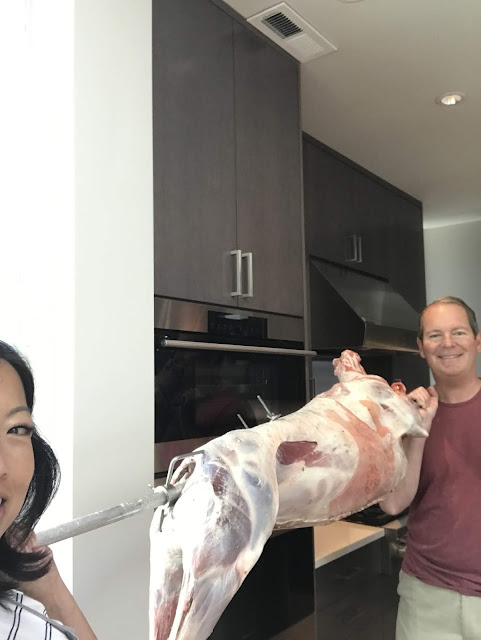 The roasting started with the lamb in the top position on the rotisserie.  Coals were placed on each side of the lamb, but not right underneath.  I brushed the lamb about every half hour with a vinaigrette.  After about an hour, we moved the lamb to the middle rung.  It stayed there for the next few hours. 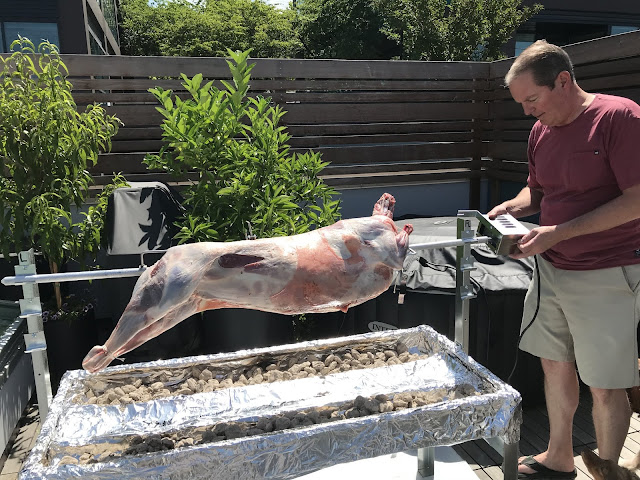 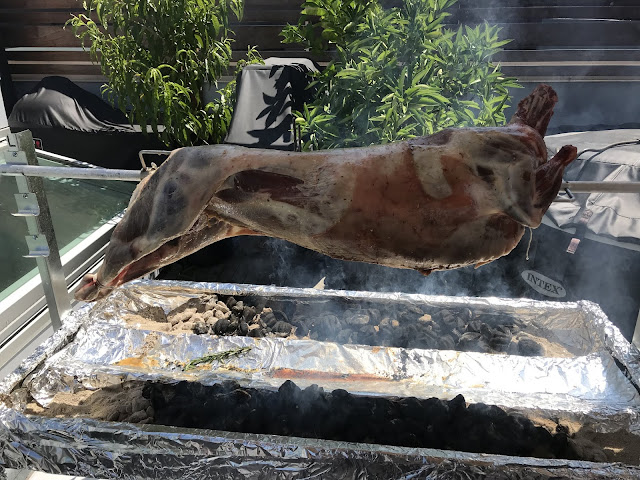 We used thick plastic sheeting to cover our wood deck under the spit.  I figured there would be some oil splatter as the lamb cooked, and there was.  I covered the entire bottom / inside of the spit with many layers of aluminum foil in an effort to keep it clean for easier storage after use.  This worked out really well because all Chris had to do the next day was to pull out any warm coals and put them into a metal bucket and then roll up the foil.  Underneath, a perfectly clean spit.

I had made a vinaigrette with olive oil, red wine vinegar, crushed garlic, rosemary, oregano, pomegranate molasses, salt and pepper to brush the lamb with.  With sprigs of fresh rosemary, oregano and parsley I made a brush to do the basting.  I also bought an injector to inject some of the marinade into the lamb.  Well, the injector got clogged, and while trying to free it, I knocked over my bowl of vinaigrette onto our wood deck.  It left a lovely giant oil splatter.  And then I had to remake the vinaigrette.  Argh! 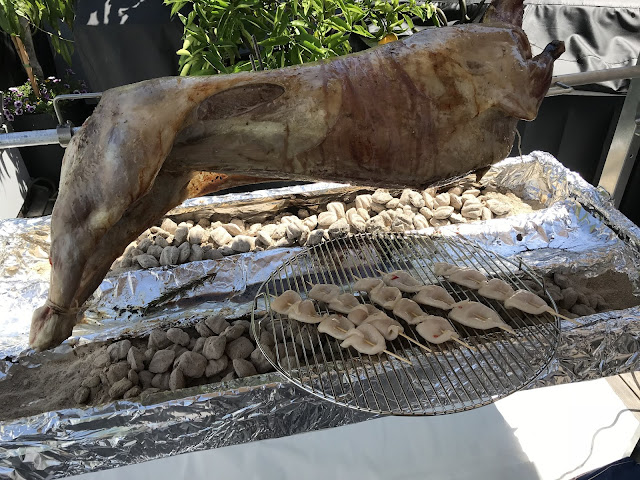 Taking the opportunity here to grill the calamari for my salad 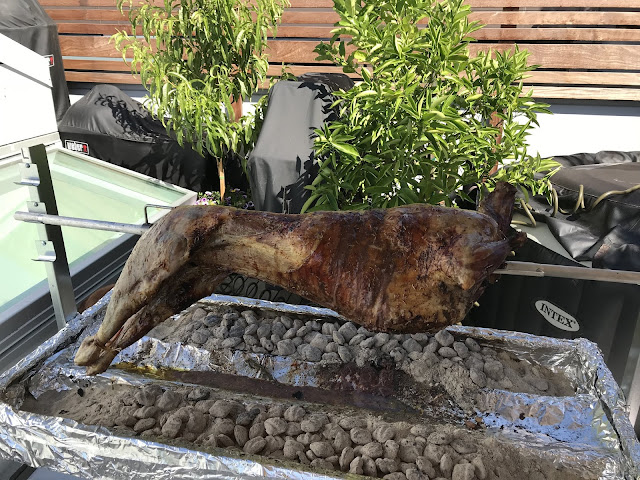 About four hours in, we thought we should take a temperature reading.  Hmm, concerning… it was only 80 degrees.  This seemed wrong given the pliability of the lamb, and as it turned out, it was. Our thermometer was broken. Another thermometer confirmed the lamb to be at 120 degrees.

Over time, as the lamb cooked, the stuffing inside began to drip and ooze, which was not making Chris happy.  Eventually, a hole developed and the stuffing fell out.  He was much happier.  We lowered the lamb to the bottom rung, closest to the coals for the last hour and half of roasting.  The best part of the lamb were the pieces Chris cut off while it was still on the spit.  Those hot juicy pieces with the crispy outer were delightful.  Total roasting time, about 6 hours.  Total charcoal briquettes used, 74 pounds.  Total lamb, oodles and oodles. 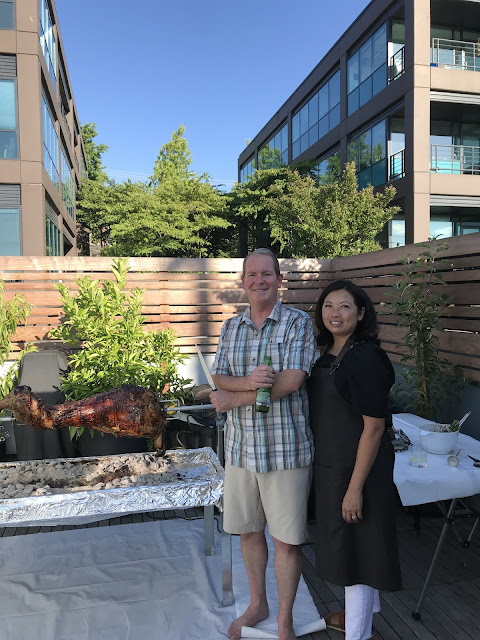 We took the lamb off and set it to rest on a side table we had set up next to the spit.  The side table was covered with plastic and then foil.  It was there that I broke down the lamb into large pieces to be brought down to the kitchen to carve.  Wow, did we have a lot of meat! 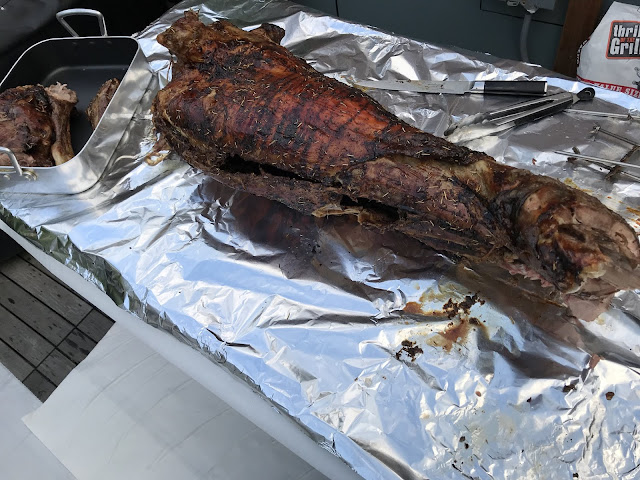 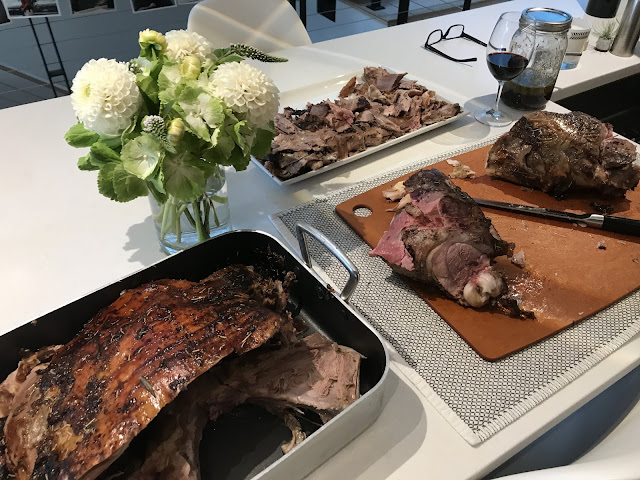 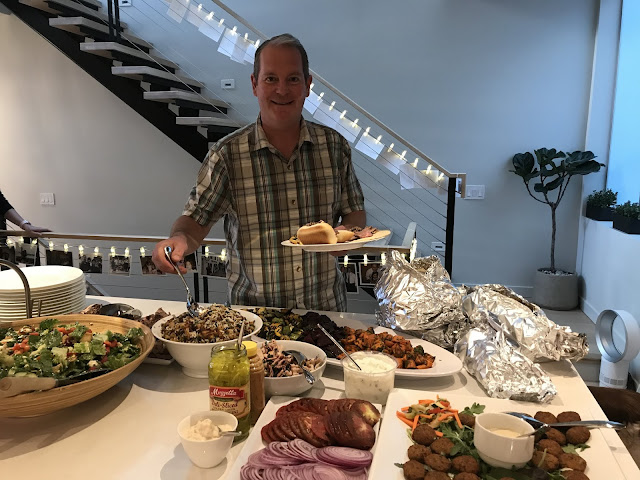 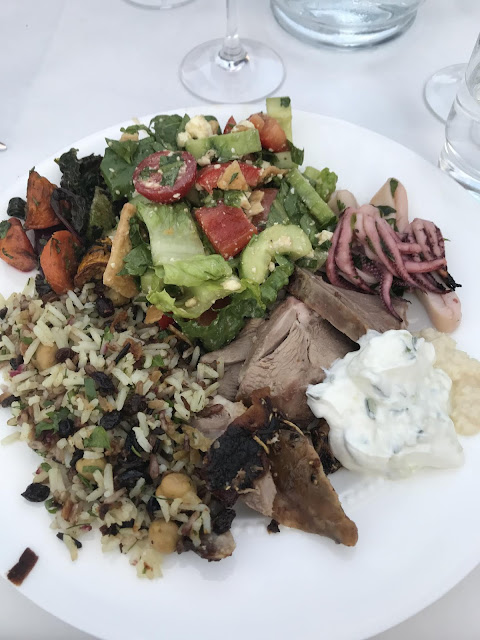 It was a blur of lamb haze for me.  I felt quite calm and easy until the last flurry of getting the lamb served.  It was a perfectly beautiful day for a lamb roast.  Not too hot, mid 70’s, and cool breeze.  If there was one thing that could have been better was it not being so cool out when we ate, as it chilled the food down quickly.  The lamb was better hot off the spit.  Next time, perhaps I would carve it table side.  What to do with all the leftover lamb?  I’ve already made one dinner of lamb ragu and pasta.  I’ll be taking a break from lamb tonight, but tomorrow… who knows what lamb delight will arise.