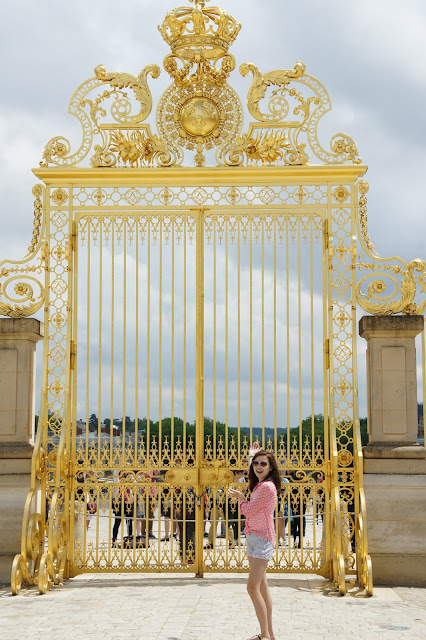 It is already Thursday in Paris.  The week is flying by.  Today, we made the trek out to the Chateau du Versailles on the RER C train.  A 10:30am departure from the apartment got us to the gates of Versailles at about noon.  The weather has cooled a bit, but a patch of rain blew in.  Fortunately, we were on the train during that time as the skies cleared once we arrived in Versailles.  From the train station, it is just a ten minute walk to the Chateau.  Mon dieu, there were a lot of people.  A sea of tour buses parked at one side and a labyrinth of bodies snaking the plaza at the entrance.  We could not even decipher where we would begin to line up.  We decided to tour the garden first.

The garden is vast and sprawling and would take hours to explore by foot.  There are golf carts for rent, but waiting for one seemed to be tantamount to waiting for Godot.  We walked a small portion of it before having our lunch. 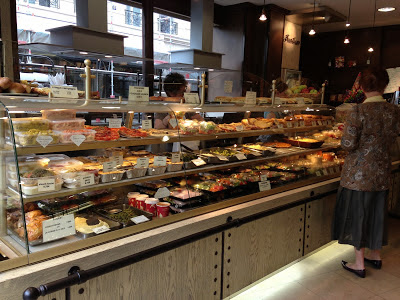 On our way to the train this morning, we had stopped at our neighborhood boulangerie and had gotten some sandwiches.  In the garden, there were places to buy food, drinks and treats set off to the side in an inconspicuous location.  We bought some drinks and found a nice bench to have our picnic. 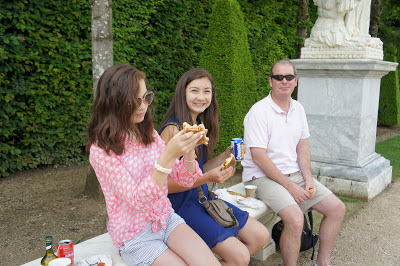 I could show you a whole album of photos of the garden.  It is truly awe inspiring.  But here are just a few to give you a feel for it.  There was a contemporary art exhibit by an Italian artist, Giuseppe Penome.  The photos of the various tree formations are from that. 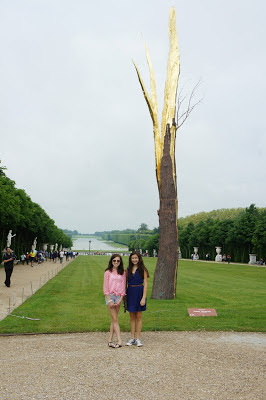 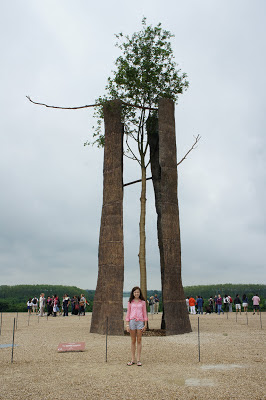 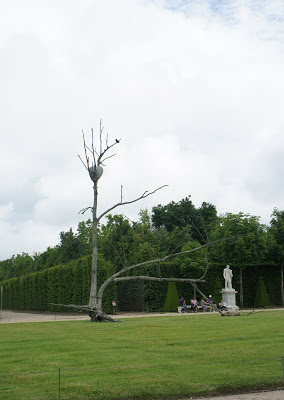 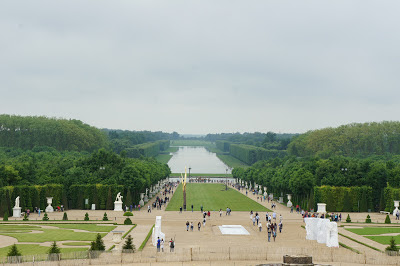 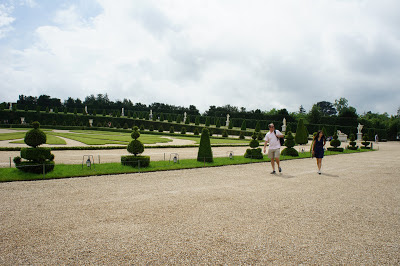 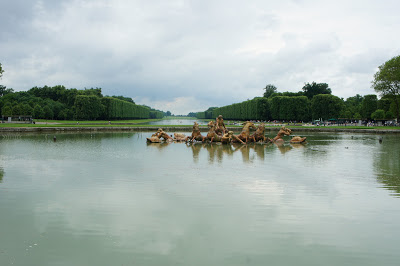 The thought of the wealth and the work that went into the garden and the chateau was overwhelming.  It is so extravagant and lavish.  After the garden, it was time to tackle the palace.  What will the entrance look like now? 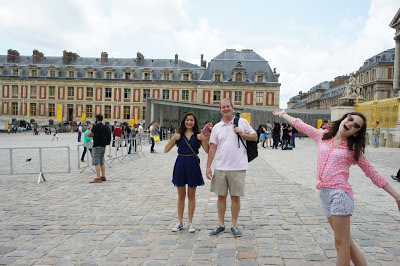 At 2:00pm, there was no line at all.  We walked straight in.  Once inside it was a different story.  I am not a fan of being in large lines or mobs of people.  Who is, right?  I am also not someone who needs to see every bit of something.  I took Stella to Alcatraz once and we made it up to the prison cells and back down the hill to catch the ferry back before the folks on our ferry there started the walk up the hill to the prison.  Stella's memory of that trip was that she saw two bathrooms and two cells. With just two days in San Francisco, I told Stella, you've seen one cell, you've seen them all.  We were on the fast track tour.

I would apply this theory to the rooms within the Chateau du Versailles in the conditions we experienced.  There are a few large rooms to see, and that you can actually take the time to see, like the Hall of Mirrors where the crowd dispersed a bit.  But for me, interest wains for each individual room when one is shuffling slowly, packed in like cattle, being pushed through small doorways.  Looking at something through the back of an island of heads and sweaty bodies diminishes the beauty of the site you are trying to enjoy, never mind having the patience to learn something about what you are seeing.  What it must have been like when the outside line was so massive.  Had we waited 2 hours to get in and then been forced through the cattle call, there most certainly would have been a lot more belly aching.  Perhaps an even later entry into the chateau would have allowed for more of the crowd to have funneled through.  If you never make it inside the Chateau, here are a few photos for you. 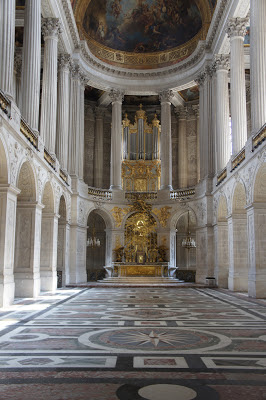 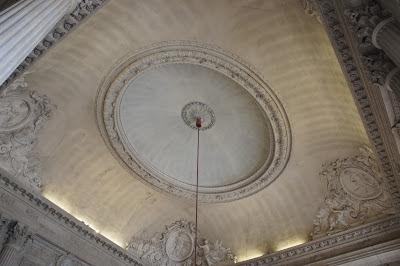 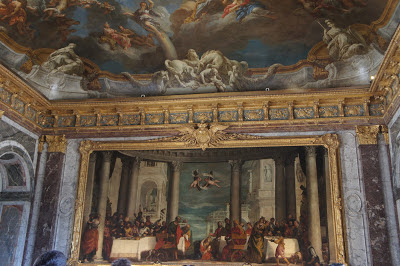 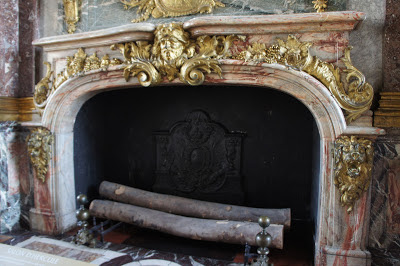 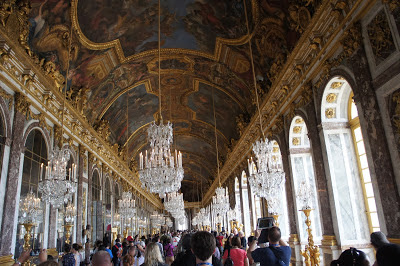 The part we enjoyed the most was the Treasure of the Holy Sepulchre. There were magnificent pieces of silver and intricately woven masterpieces of robes.  Yet, no one was in that exhibit.  No photos were allowed, so I'm unable to share.  After the Hall of Mirrors, we took the first exit we came to and fled.

We made our way back to the train and then some horrible man made my baby girl cry.  We took the RER C train back into town.  At our transfer station, we decided to take a local train, the M 6, to the Charles de Gaulle station.  As we exited the train, Maggie felt a little bump and then once off, she checked her handbag and her phone had been taken.  We all think we saw the man who took her phone, but he was gone into the crowd in a flash.  As Stella says, that really puts a hitch in our dosey doe.  We really wished we could self destruct the phone like in Mission Impossible.  Or perhaps an electric current could be shot up through him via the phone.  Surely there's an app for that.  I am going to believe that karma will take care of him.

Before our trip, Chris had researched the many scams and pick pocketing situations that might occur in Paris.  We planned accordingly and discussed how we should carry and protect our handbags and backpacks.  Chris even got locks for the zipper pulls on his backpack.  So, we were by no means ignorant or unprepared for such an occurrence.  All it took was a second of lapsed attention at a very busy metro station and the phone was taken.  So, even if you think you are being careful, be extra vigilant.  Had Chris' pants not been so tight from all of the paté and jambon eating, perhaps he may have been the target of the pick pocketer.  I keep my items in a handbag, or the same could be said about me.

This leads me to dinner.  We ate a bit earlier tonight as we walked to a nearby area, close to the Avenue Victor Hugo and Place de Victor Hugo and chose Fuxia L'Epicerie, an Italian restaurant.  I had a shrimp risotto that was so, so rich, it must have been mostly cream. 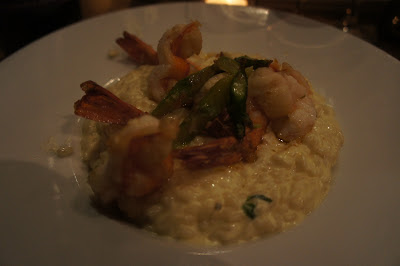 We have decided to stop trying to get to a specific restaurant for dinner.  It's less pressure and just easier to just go to an area that appeals to us at the moment and find something that looks good.  Might we be missing a meal of a lifetime in Paris?  Perhaps, but we would never know and there seems to be plenty of good meals out there to be had.

On a final note, someone had asked me whether any of us spoke French and how were getting about with or without it.  I took French in high school as well as a semester in college.  But, I have never had the opportunity to use it, until now.  It has been over 25 years, but I have retained enough to read most of the menus and get by with simple phrases.  It took a few days to get comfortable with speaking out in french, but I think the French appreciate it if you try.  I find almost everyone in the service industry here speaks English better than I can speak French.  But, they are very friendly and helpful when I approach them trying to speak in French.  A little bit of effort gets you a long way.

Good night!  Tomorrow is a new day.  I am going to get to work on that app.
Email Post
Labels: Sidebar Info Trips