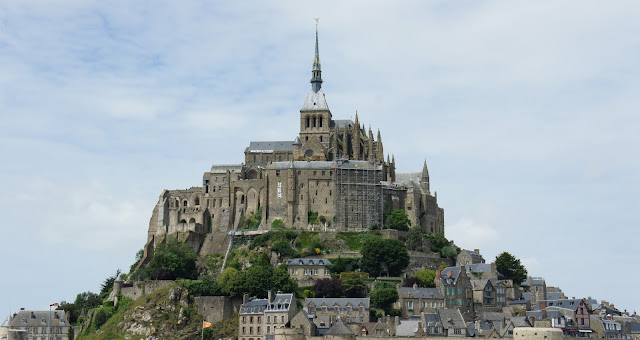 Today, we made our way southwest to Le Mont Saint-Michel.  It was about a two hour drive and we stopped in the town of Avranches, which is only about 20 km from Mont Saint-Michel to have lunch.  We planned an afternoon arrival to miss some of the crowds.  It would be remiss to not mention how much the navigation system in the car has helped us.  We could have found our route on our phone, or using a map (gulp), but it would not have been nearly as accurate and helpful as the GPS in the car, right down to the speed limit of each road we were on.  This resulted in no aggravation, no getting lost, and no fights. 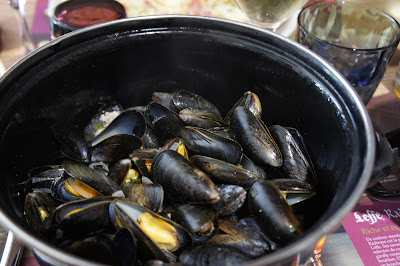 For lunch, I had a large bowl of moules mariniere.  They were really fresh and the wine sauce was excellent.  I told the girls the about the time I ate so much calamari in a Thai calamari salad, that I had an allergic reaction.  My face broke out in hives.  I was hoping this would not happen today, while Stella was hoping for the opposite purely for comedic value.  It’s nice to be loved.  I escaped unscathed and we arrived in Mont Saint-Michel about 15 minutes later. 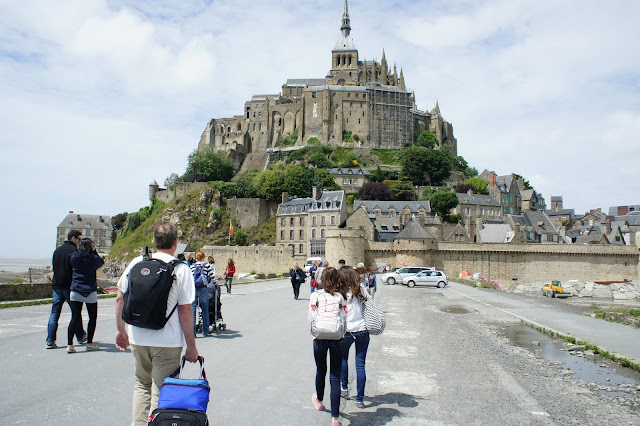 As Mont Saint-Michel is an island, and the Abbey and surrounding buildings take up all of the footprint, with the exception of service vehicles, there is no parking or driving your car there.  Instead, you park down the road and take a shuttle, or walk on.  There is currently construction being done on a new road into the island.  Chris had booked us into Le Mouton Blanc, Auberge Normande, for the night, which is on the island.  As such, we consolidated our needed clothes and items into one suitcase and left the rest in the car.

We walked up a narrow alley and found our hotel. 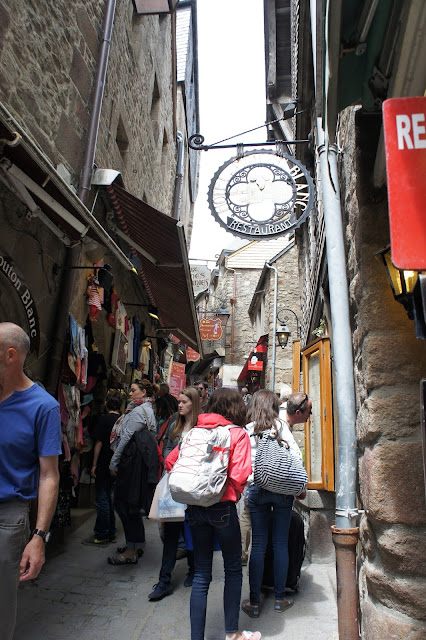 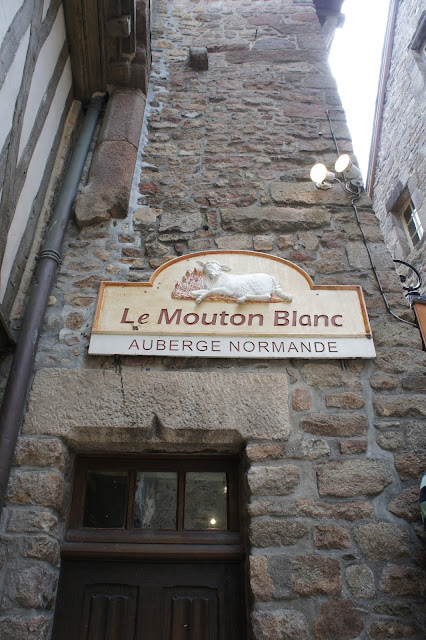 After checking in, they sent us further up the alley to find our room.  It was through this archway and up the stairs. 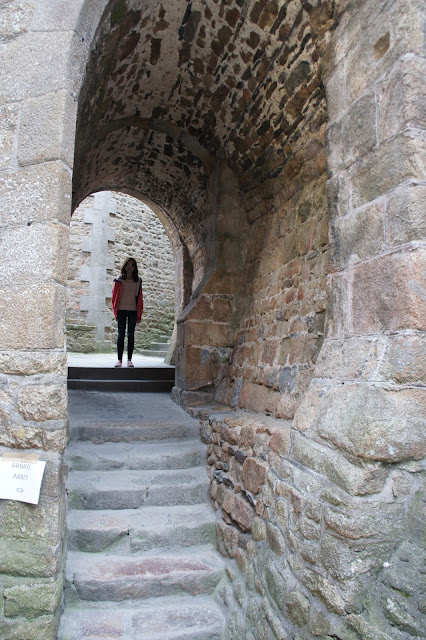 And through this brown door. The room was small, but not tiny, and we had two interesting views out each end of our room. 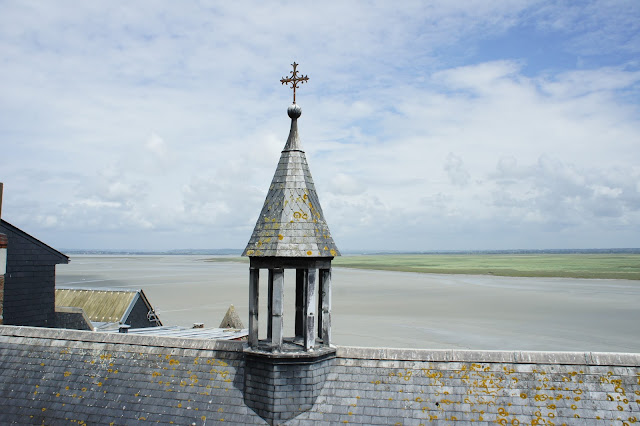 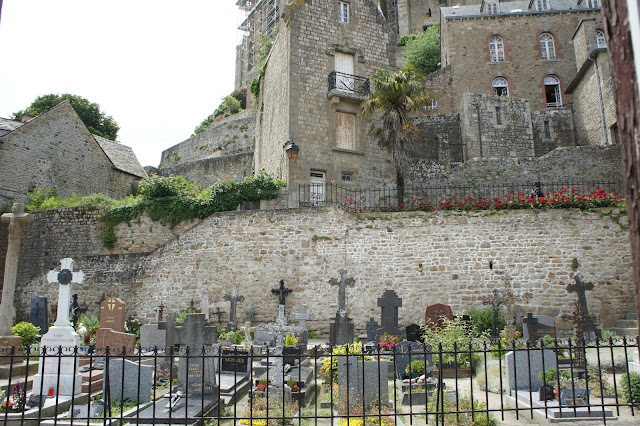 Looking back from across the cemetery, our room is the window just to the left of the white cross. 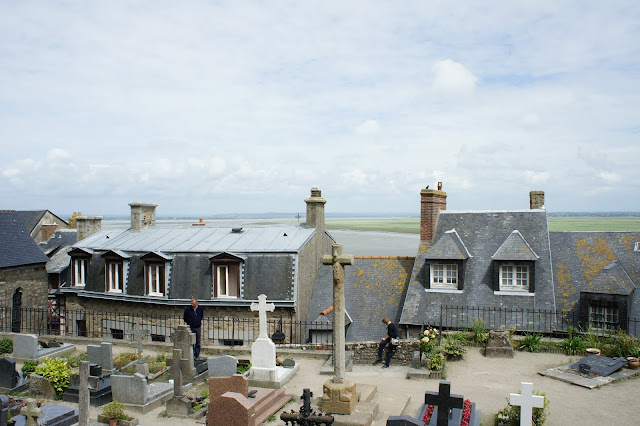 After we dropped off our bags, we went to explore the Abbey.  The workers were on strike, so the Abbey was closing early tonight and the entrance fee was free. 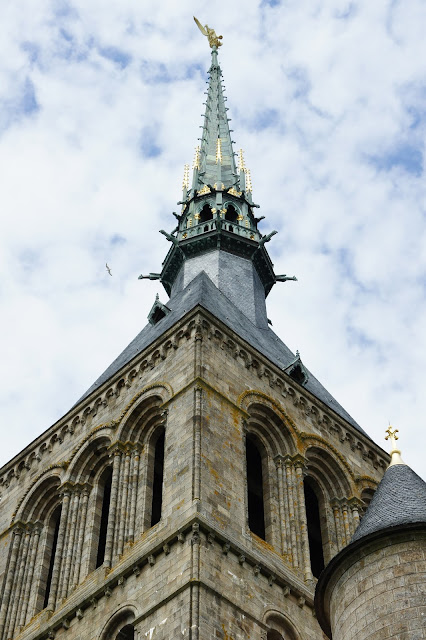 Views from the top of the Abbey.  The tide was out, so an expanse of sand was exposed.

This is a large wheel that was used as a crank to pull up supplies to the Abbey. 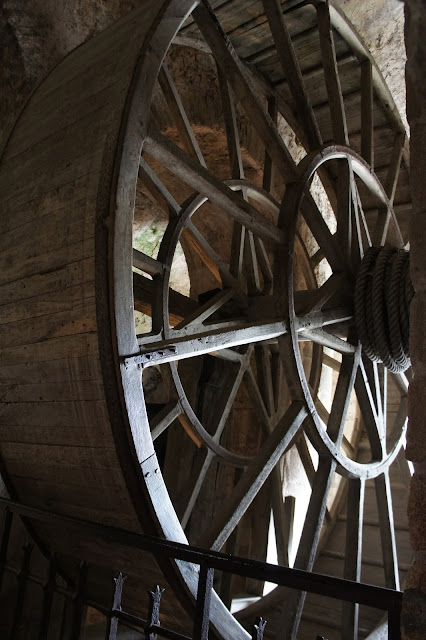 And a little angel in the light. 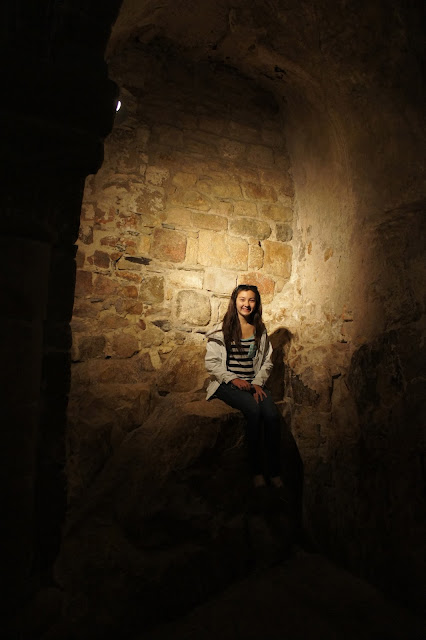 Our evening was capped off with a dinner at Le Mouton Blanc restaurant.  The island emptied quickly in the evening and we had thought we would be one of the few to have dinner in the restaurant, but the room quickly filled.  The food was nothing to write home about, but we are not here for the food. 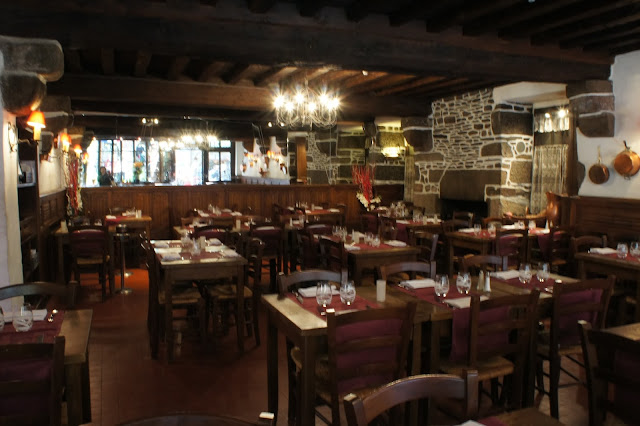 The tide has come in. 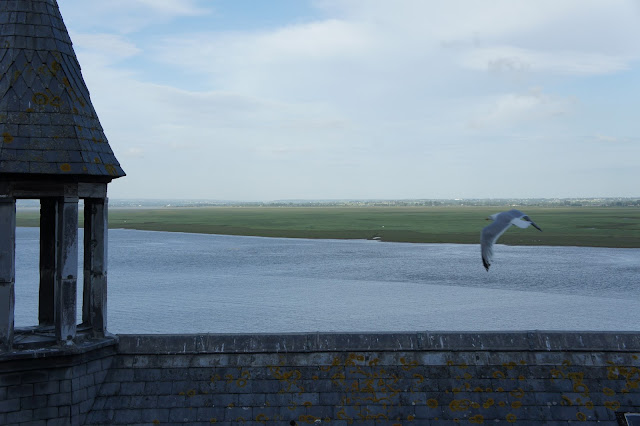 It's been another wonderful day in France.  The countryside is truly breathtaking.  Everything looks so pristine; not one tiny bit of trash along the roads or highways. The perimeter of the crop fields are often lined with beautiful wildflowers.  The cows and sheep must be so happy in the rolling green fields of grass.   It's just beautiful. 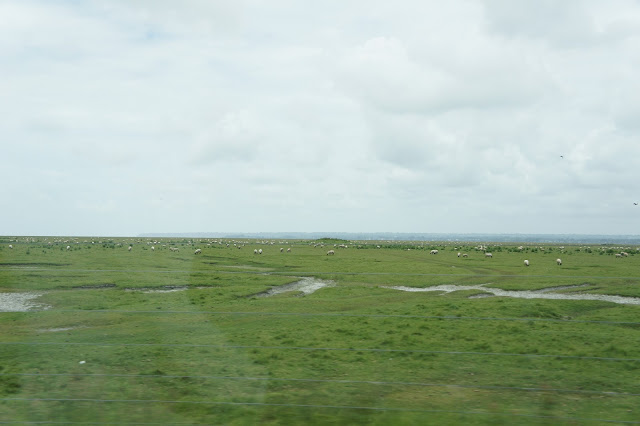 On our way to Mont Saint-Michel, a field of sheep.  This was taken through the car window, hence the reflection.
Email Post
Labels: Sidebar Info Trips