Last Day in Paris, Vendredi. Food Shops, a Lunch at L'Absinthe, and a Dinner Post by Chris 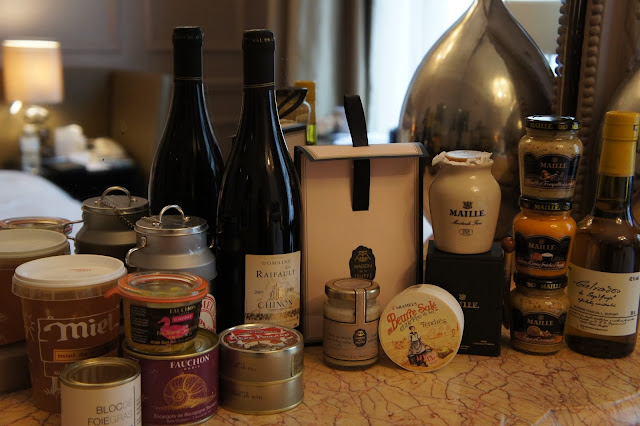 What a spectacular time we've had in France.  The buzz of Paris, the two hour lunches, the adventure of getting around, the friendly people, the long walks, all the sightseeing, the beautiful countryside and of course those sweet cows.  As we sat after our lunch today, we asked the girls if there was anything we missed or anything else they wanted to see.  Stella's only wish was to go back to Normandy for more ice cream.  It was the best there.  The rest of us were satisfied and ready to head home to rest, sleep in our own beds and hug Pacino.  Today, we walked the streets of Paris one last time and visited some specialty food shops.  Pictured above are the small items we've picked up during our trip that we'll be bringing home with us.  Just some little souvenirs of France.  And below, some of the stops we made today. 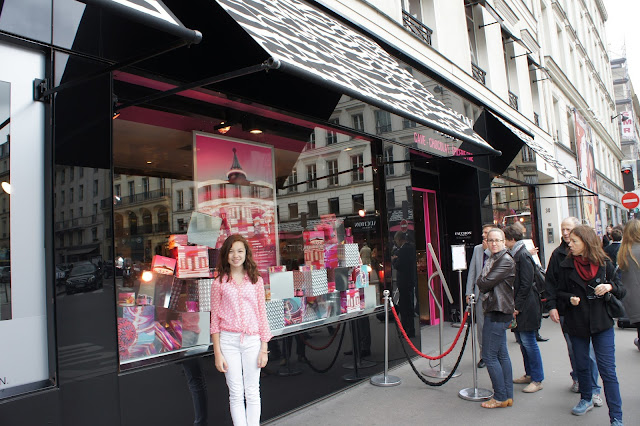 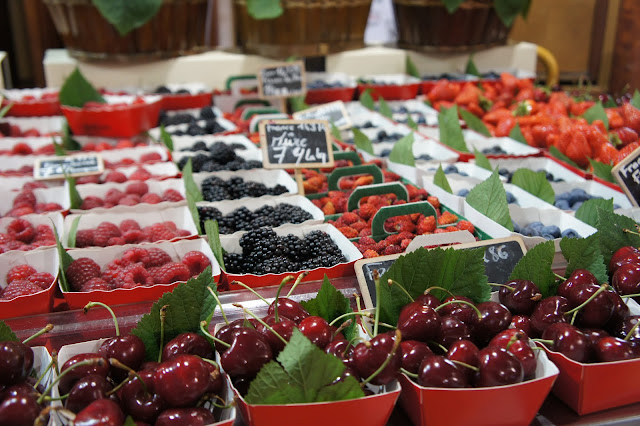 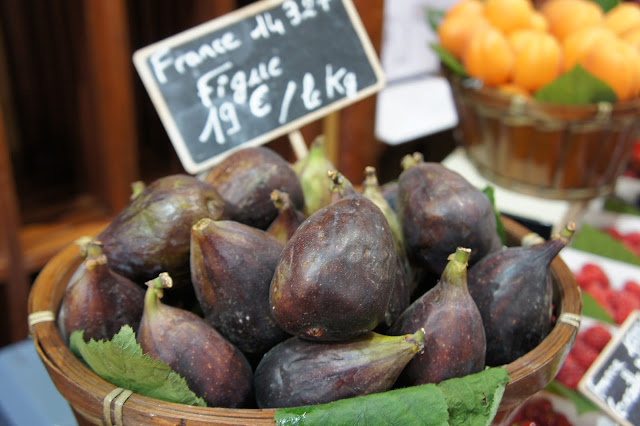 The above photos are all from Hediard 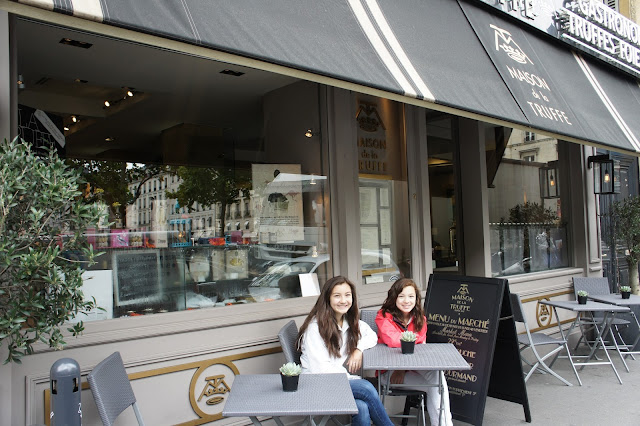 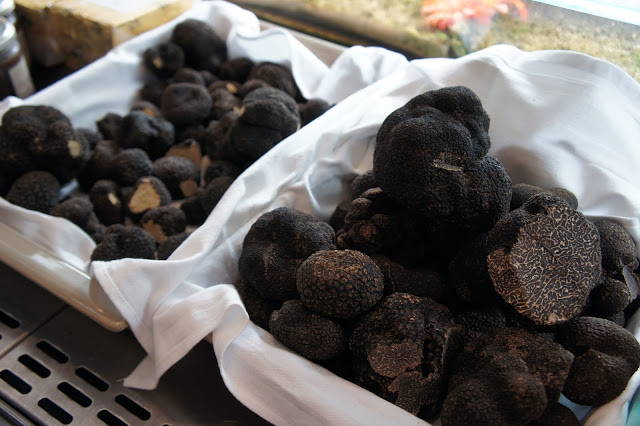 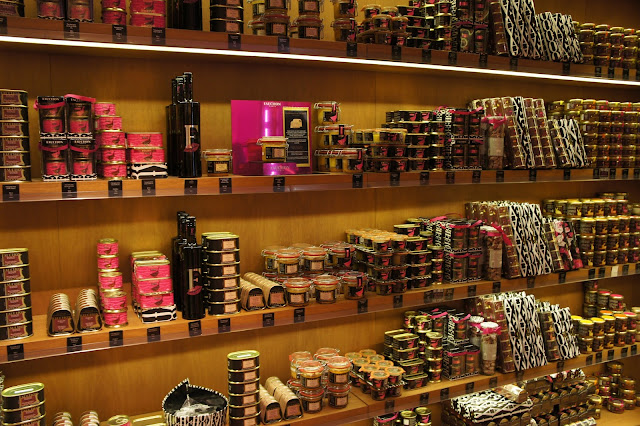 The many duck and goose foie gras products of Fouchon 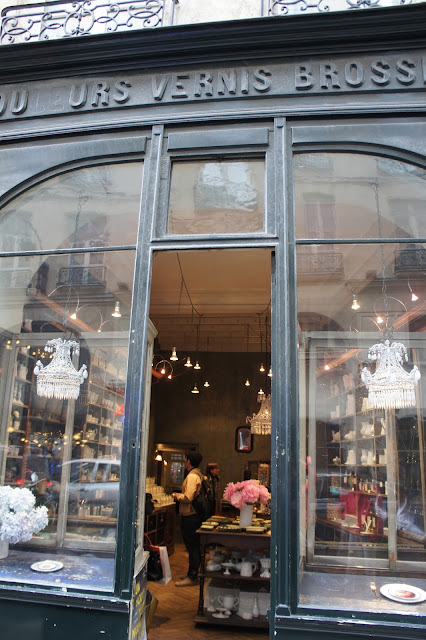 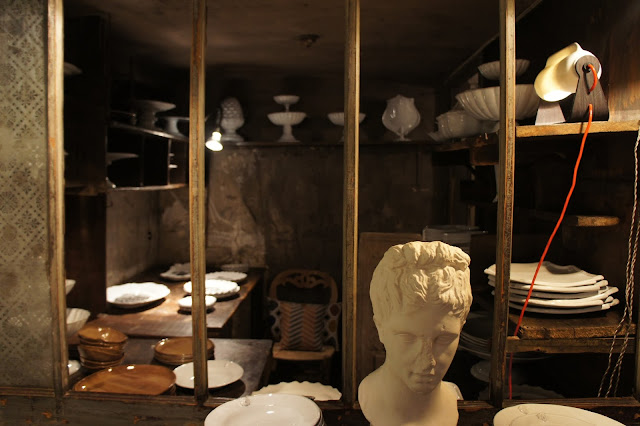 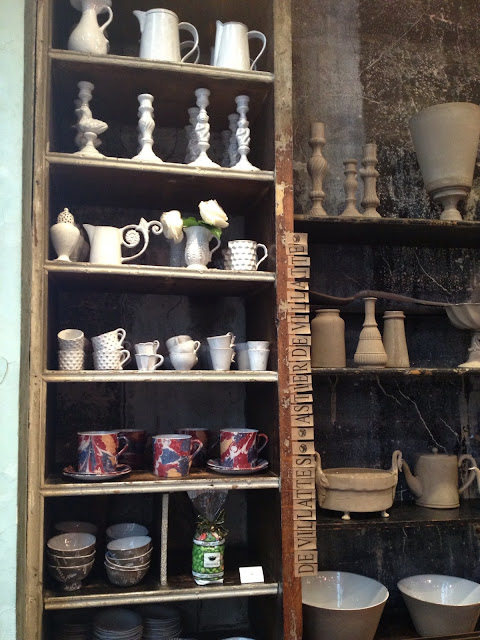 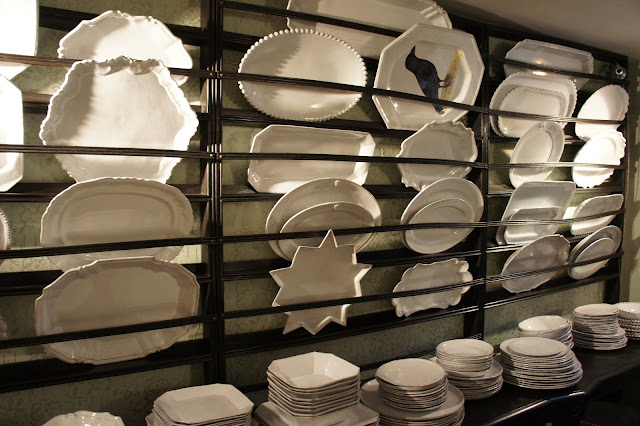 Lunch was a success at L'Absinthe, on Saint-Honoré, a short walk from our hotel.  Everything we ordered had its own flavor and was beautifully prepared.  We wanted a two hour lunch, a carafe of wine and a Paris experience for our last lunch and we got it. 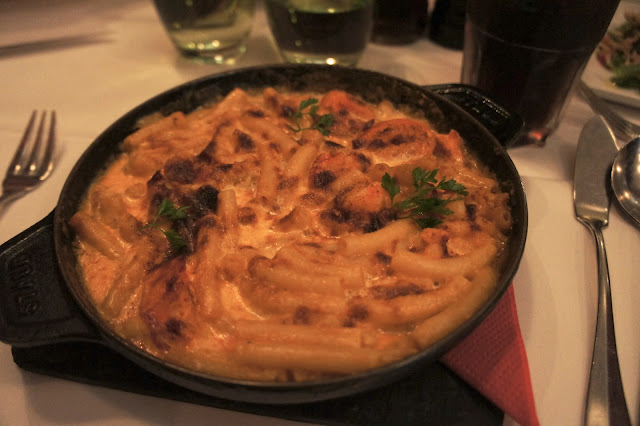 One of today's specials, Lobster Macaroni and Cheese 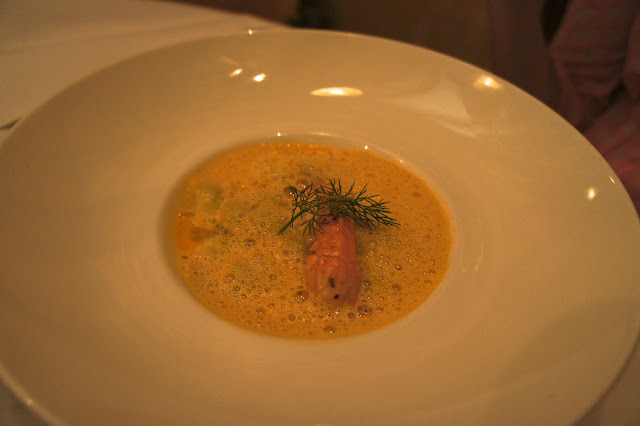 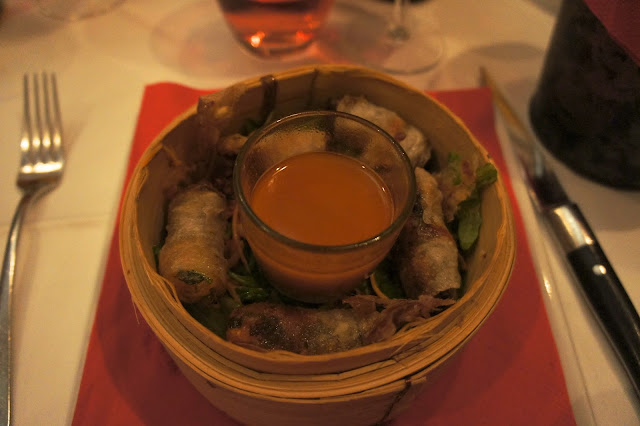 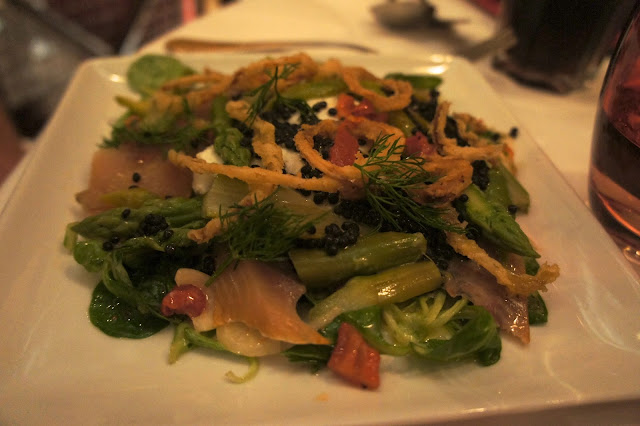 All excellent and worth a return trip.

And Now a guest post from Chris.
I have always been a pizza guy so when I read that Pizza Rossi was ranked number 12 out of 9,788 restaurants in Paris on TripAdvisor, how could I resist.  Little did I know that 7:30pm on a friday in Paris was when all Parisian taxis take a café break (at least I think that's what he said), so we headed off on the estimated 15 minute walk.  45 minutes later we were surrounded by 64 year old Parisian prostitutes wearing thigh high boots.  I had many questions right about now, a) who is frequenting these frightening creatures, b) why is my dream pizza place located here and c) where the hell is this supposed heavenly pizza joint?  Now sweating from a long walk and dodging the oldest prostitutes known to man, we arrived at Pizza Rossi.  Was this a joke?  Surely the folks on trip advisor, as my brother in-law would say, are having a go.  This place would have disappointed if I showed up with my buddies when I was in college, not to mention the last night of a long planned trip overseas with my family.  So we high tailed it out of there to try and find a taxi back to the Japanese cuisine district.  Let's take a taxi, nope still on café break.  Rant here, I have seen more taxis with no people in them in Paris than those with.  What gives?  There seem to be many taxis but no way to actually catch one. Paris better look out when a ride share program like Lyft gets here. All those resting taxis are going to have to start actually driving customers around.  So into the subway we went. Stella reinforced what a great neighborhood we were in when she pointed out "gee there sure are a lot of people jumping the turnstile".  20 minutes later we were back in familiar territory and searching for dinner, liquid refreshment and a bathroom.  Udon was the call, so we knew where that was. Nope, line out the door.  Second udon joint, nope, line out the door.  Thai place, nope, go away.  I know the Izakaya place we ate last night, maybe he will take us in. Yep, score.  So, our last night in Paris lead us back to our best meal and a do over that did not disappoint. We ate a little slower and savored it a little more but it was equally delicious and as Stella said "it was fate that we were lead back here" as she slurped down her portion of soft shelled crab.  I think it was a good end to our adventure. -Chris

I leave you with a few final photos from Paris on our last walk of the trip.  In retrospect, I wish I had gotten a photo of the prostitutes outside Pizza Rossi.  There were at least a dozen of them on that one block.  We did not see any anywhere else, until that street.  I mean truly, what in the world?  We could have put a blinder on to the prostitutes, but the restaurant itself was completely unworthy of a last meal in Paris.  We were not going to stick around to find out if the pizza was good or not.  Alls well that end well though, thanks to Izakaya Issé! 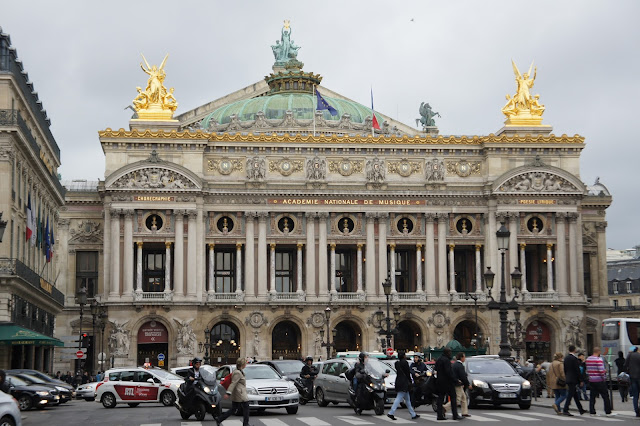 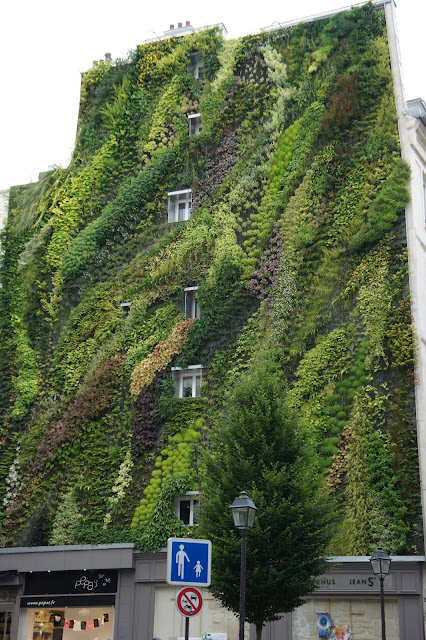 A living wall on the side of a building 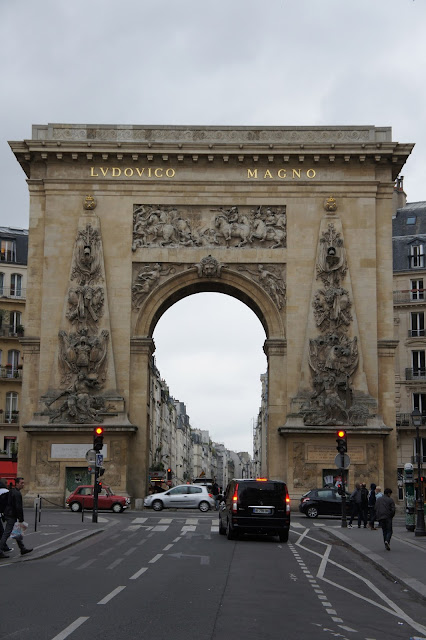 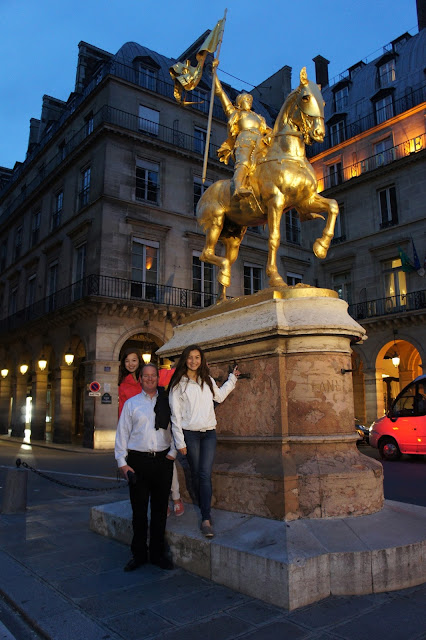 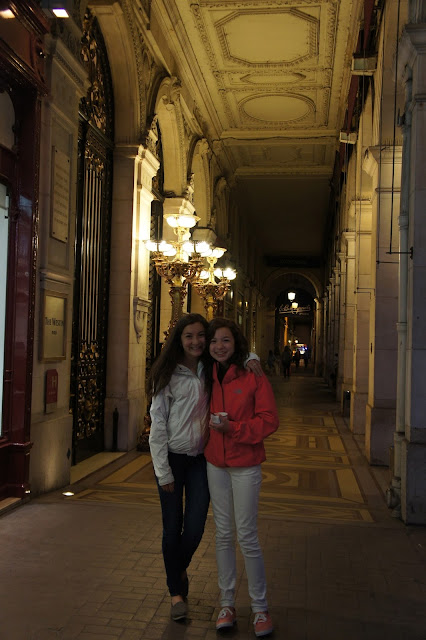