Walsh Cove and Back Down to Garden Bay 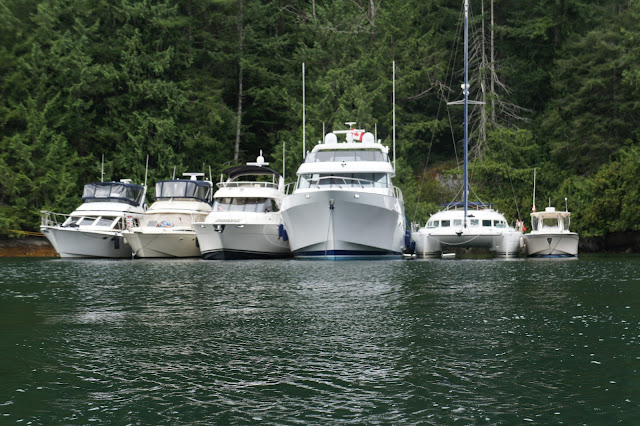 Our planned departure time was 10:00am, again at slack tide.  One night at Dent is not enough.  It really is just a little slice of heaven.  On the task list before heading out was water, ice, beer and fixing the generator. The first three were easy, the last item took a little more work.  First the boys checked to see if the raw water intake needed to be primed.  That failed, so our friend Jamie suggested it may be an impeller problem.  This did not hinder the guys from continuing to go down the priming route.  After futilely flushing tens of gallons of precious fresh spring water into the ocean, they were finally convinced it was indeed an impeller issue.  Jamie walked the guys through the simple steps of removing the faulty impeller and installing the new one.  It was yet another lesson in boating fun. 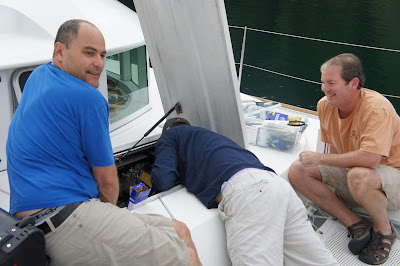 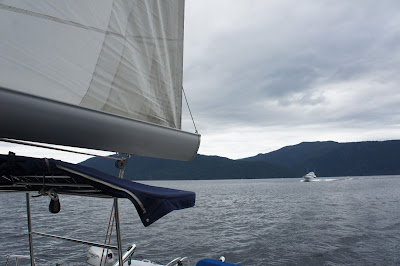 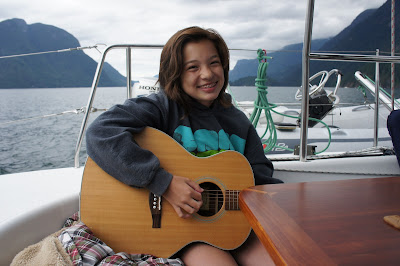 We pulled away from dock as scheduled and made our way back down through Gillard Passage, down Calm Channel, then through Pryce Channel down to Waddington Channel and into Walsh Cove to raft on to our friend’s boat.  Walsh Cove is a beautiful little spot with a couple of tiny islands to explore on and around. 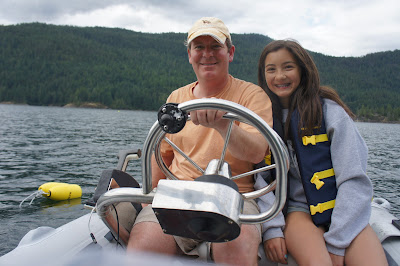 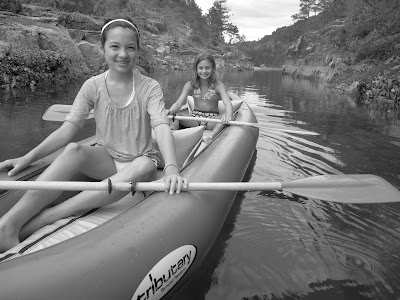 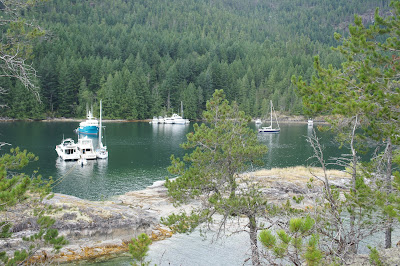 After an easy arrival and tie on, we decided to drop our shrimp pot and then Maggie and I would go explore the tiny islands.  Our flotilla turned out to be five boats and several dinghies in all with plenty of paddle boards, canoes, paddle canoes and kayaks to be used. 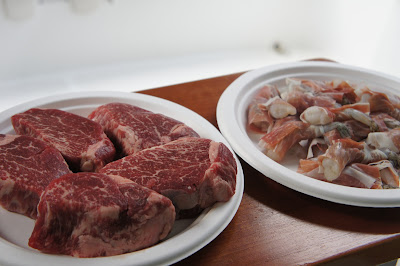 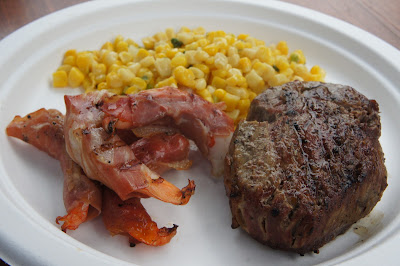 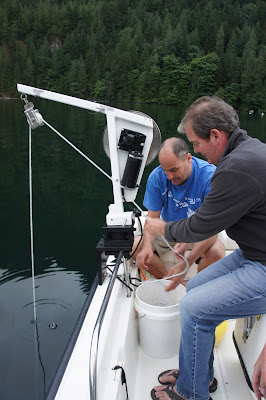 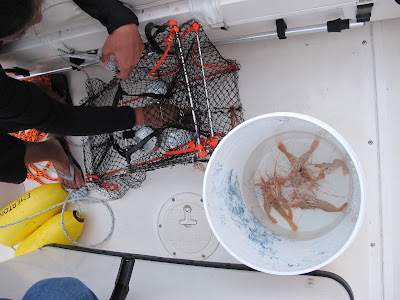 After dinner, be borrowed a raft mate’s tender that had an electric pot puller to pull our shrimp pot.  We dropped the pot in about 250 feet of water…that’s a lot to pull up by hand.  Marcel was relieved at this as I had already told him he was going to ‘get’ to pull up the pot.  The pot did not see much time in the water, but we were planning an early departure the next morning, so it had to be pulled before dark tonight.  Our quick drop yielded only ten spot prawns, but we were happy not to be skunked.  We will have them as an appetizer tomorrow night.

It was another fabulous day in the books.  After a little movie watching, a little star gazing, it was off to bed.  Early morning for us tomorrow as we start our trek back down to Vancouver. 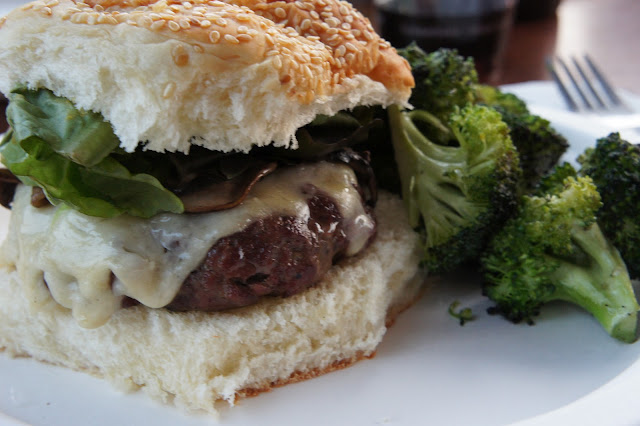 I actually set my alarm this morning for a 7:00am wake-up targeting an 8:00am departure.  We were up late last night making it a more difficult wake-up.  We tried to quietly slip away in the morning so as to not disturb the rest of the cove, but the inevitable start of our engines and the pulling up of our dinghy did create a bit of a ruckus.  We were fortunate enough to fill our water tank with water off of our friend’s boat and then we were off. 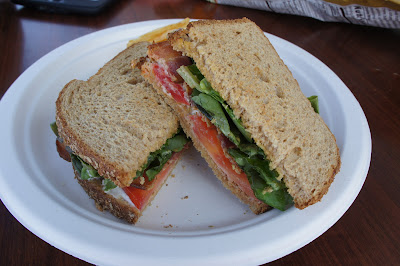 The captain requested a captain’s muffin, with bacon, for breakfast.  So, a lengthy bacon frying session ensued as BLTs were on the spreadsheet for lunch today.  Might as well get it all done in one go.

Our route today was south through Waddington Channel, then leaving Desolation Sound behind, hugging the eastern edge of the Strait of Georgia on back down to Pender Harbour and finally anchoring in Garden Bay.  It was a long day to get down here, but we did so on fairly calm waters and blue skies.

After anchoring, we took the dinghy over to Madeira Park for a stop at the market to get some ice cream, something green to eat and a refill on chips and soda.  I have been feeling a serious lack of roughage, and will be making up for it tonight.  For dinner we are having food processor cut cheese burgers and grilled broccoli and the spot prawns we caught yesterday as an appetizer. 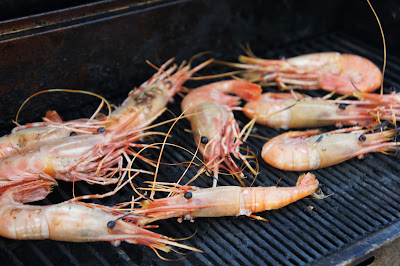 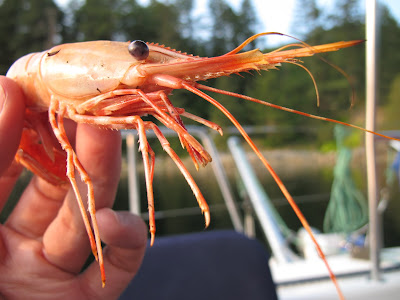 I made the burgers at home and again, froze them for the trip.  I used Costco beef short ribs and processed them to a rough cut to form the patties.  I sautéed some sliced mushrooms to go with the burgers.  Beecher’s Flagship cheddar, lettuce and tomato rounded out our burgers for everyone but Chris, who opted for American cheese stating it interfered less with the taste of the beef. 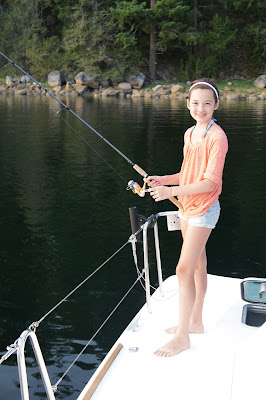 Stella made a quick attempt at fishing as we discovered an Eagle was out hunting for its babies and she was hoping to catch a fish for the eagle to bring back.
Tonight’s dinner discussion was how each of us would alter the boat to better suit our likes.  Chris wanted a hard enclosure and rigid windshields in the cockpit area and solar and wind generators.  Marcel would like a little more headroom as he has banged his head countless times on various overhead surfaces.  I’d like to have everything bigger.  Maggie would like an even wider boat and redesign the interior salon area to include a larger kitchen and an outside grill station and have solar panels to help power the boat.  Stella would like a larger water tank as she could not fully grasp the concept that we are not hooked up to a water line and a straight instead of a curved couch for better lounging ability.

After dinner, we all got into the dinghy for an after dark cruise around the harbour and then tucked ourselves into bed for a good sleep.
Email Post
Labels: Sidebar Info Trips