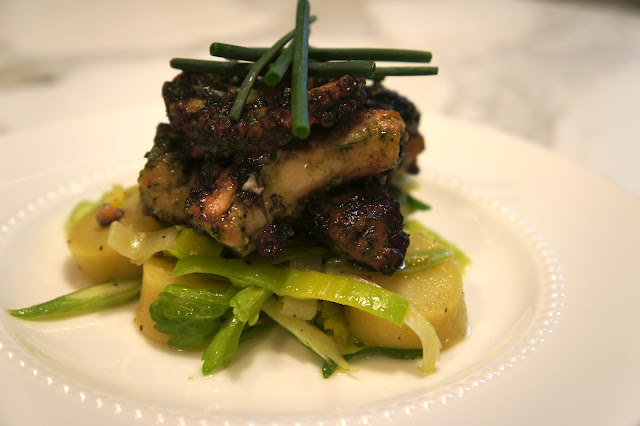 Whenever I see octopus on a menu, I am drawn to order it.  Here's another dish I had at Osteria Mozza.  The octopus was wonderfully tender, but not at all mushy and retained its delicate flavor.  Now that I have the cookbook, I had to try my hand at making my first octopus. 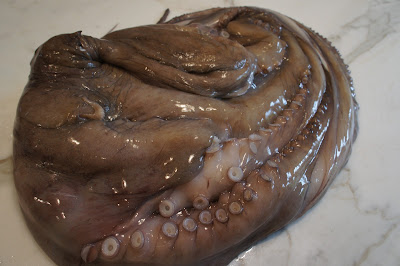 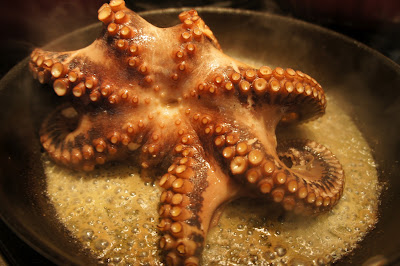 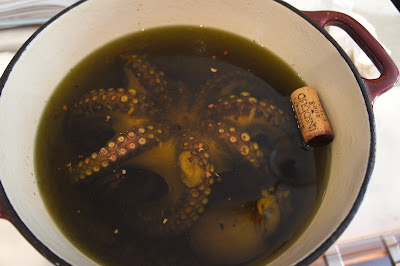 In a braising pot just large enough to hold the octopus, heat 2 tbsp of olive oil and sauté the garlic over medium-high heat until it is golden brown.  Turn heat off, remove the garlic and place the octopus into the pot along with the red pepper flakes, wine cork and enough oil to cover the octopus.  I cut the head off to make the octopus flatter so that I would not need to use as much oil.  Put the lid on the pot and place into the oven for 1 1/2 to 2 hours, until the octopus is very tender.  It should puncture and tear easily with a fork.
Remove the pot from the oven and let the octopus cook to room temperature in the oil.  Remove the octopus from the oil and place it on a baking sheet.  Cover the baking sheet with plastic wrap and refrigerate overnight or for at least several hours.
You can strain and save the oil in the refrigerator for up to a week and use it to cook another octopus. 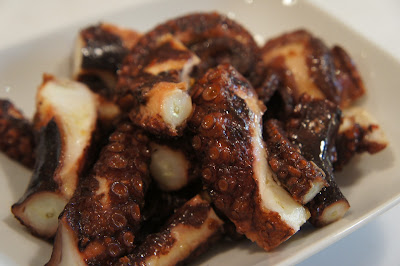 Lay the octopus out on a cutting board.  Cut it in half through the body, keeping the tentacles in tact.  Cut each tentacle at its base to remove it from the head.  Cut the head into quarters or 6ths, cut the tentacles into 2-inch segments, leaving the ends of each long for a dramatic presentation on the plate.   Place all of the pieces into a large bowl. 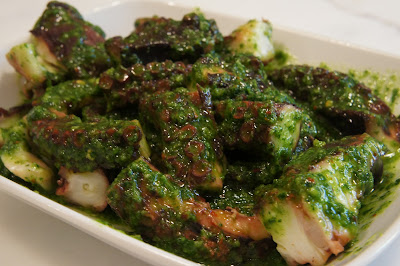 Make the marinade:
1 Cup whole Italian parsley leaves
1/2 Cup extra virgin olive oil
1/4 Cup Garlic cloves
1 tsp red pepper flakes
Combine everything in a food processor or a blender and puree.  Toss the marinade with the octopus.  Cover the bowl with plastic wrap and refrigerate until you are ready to grill it, or for up to 3 days.

Steam the potatoes for about 15-20 minutes, until tender.  When cool enough to handle, peel the potatoes and cut into 1/2" thick rounds.  Place into a bowl and set aside.
Bring a pot of water with 1 Tbsp of salt to boil.  Place leeks into a strainer and blanch them for 1 minute.  Dunk the leeks into a bowl of ice water to cool them.  Place them onto paper towels to dry.
To make the salad, season the potatoes with 1/2 tsp of salt and toss together to evenly distribute.  Add the leek, scallions, celery, celery leaves.  Drizzle 1/4 cup plus 2 tbsp of the vinaigrette, and toss to coat.  Season with salt and pepper to taste.
Pile the salad in the center of 4 plates, dividing equally and reserving any vinaigrette left at the bottom of the bowl.

For the Octopus:
Heat your gas or charcoal grill on high.  Grill the octopus pieces until they are charred on all sides, about 3 minutes total.  Remove the pieces as they are done and place them into the bowl with the reserved vinaigrette.  Drizzle with additional vinaigrette to coat the octopus.  Adjust seasoning with additional salt if needed.
To finish, stack the octopus pieces on top of the salads.  Squeeze a few drops of lemon over top and finish with a few chive pieces over top.
Due to a scheduling conflict the day I poached the octopus, I think I overcooked it.  So sad.  But we really liked the flavors and the salad.  Just a little less time on the octopus and it would have been fabulous.  The Mozza recipe referred to Mario Batali's Babbo restaurant octopus.  I happen to have that cookbook and that recipe calls for poaching the octopus in its own liquid.  I will try this route next.
Email Post
Labels: Appetizer Seafood