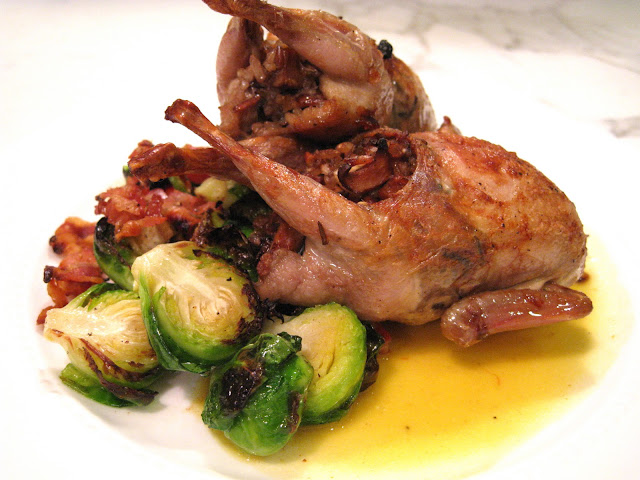 We reached another milestone today.  The girls have flown off on their own to visit their grandparents.  My babies, not so baby anymore.  Of course this is not the fist time they have traveled off without us, but sending them off on that plane, all alone, felt different.   We are several states and a time zone away from each other.  It is another step in the walk of life.  One might think Chris and I will party it up for the weekend.  This may have been the case several years back, when the kids were younger.  But now, I think because I can see the inevitable, rightful progression towards their full independence, I will just miss them instead.  We will have a nice dinner out, but I will miss seeing them in their beds at night and just having them around me.  Just a quiet dinner for two tonight.


Cook the rice with the chicken broth and butter.  Simmer, covered, over low heat for about 25-30 minutes or until liquid is evaporated. 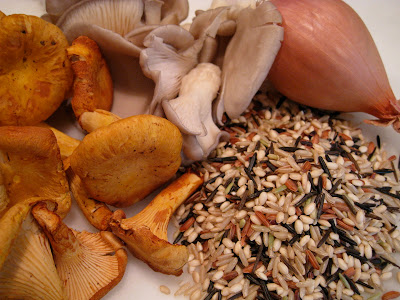 Saute shallots in a little olive oil.  Once softened, add in mushrooms and saute until just cooked.  Salt and pepper to taste.  Mix mushrooms into the rice, then add in the apples, hazelnuts, and dried currants.  Let mixture cool a bit before stuffing into quail. 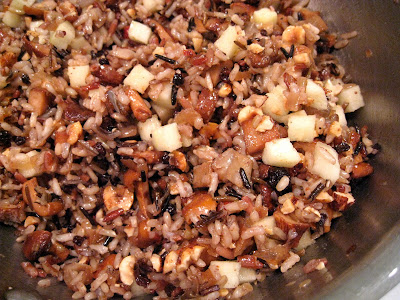 The quail is quite small once deboned.  You are likely to find bone in quail in the freezer section, which will work as well.  But it is much easier to eat boneless, and if you are in Seattle, you can go to University Seafood and Poultry for boneless quail.  Stuff the quail and truss it using kitchen string.  I did have a bit of extra stuffing left over which you could reheat and serve on the side as well.  Or if you want to make 6 quail, there would probably be enough for that. 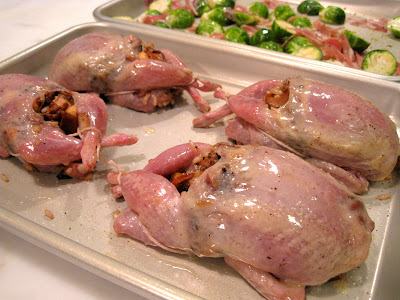 Place the quail in a non-stick baking sheet.  Salt and pepper the quail and brush it with the melted butter.  Roast the quail at 450 for about 15-20 minutes, until quail is golden brown on the outside.


In a small saucepan, simmer wine until reduced by 2/3.  (I burnt my first reduction while practicing guitar.  Poor choice of multi tasking just then.)  Add broths and boil until reduced by 1/2.  Add in pinch of saffron, and stir to incorporate.  Slowly add in the butter, 1 tbsp at a time, and stir in until melted before adding the next tbsp.  Do not bring the sauce back to a boil, or else the fat will separate.  Season with salt and pepper to taste. 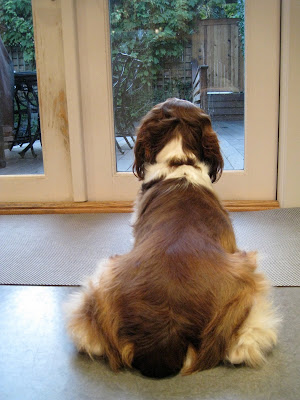 Pacino was on high alert all afternoon going in and out, seemingly waiting for his girls to come home.  How did you eat tonight Mags and Stella?
Email Post
Labels: Other Poultry