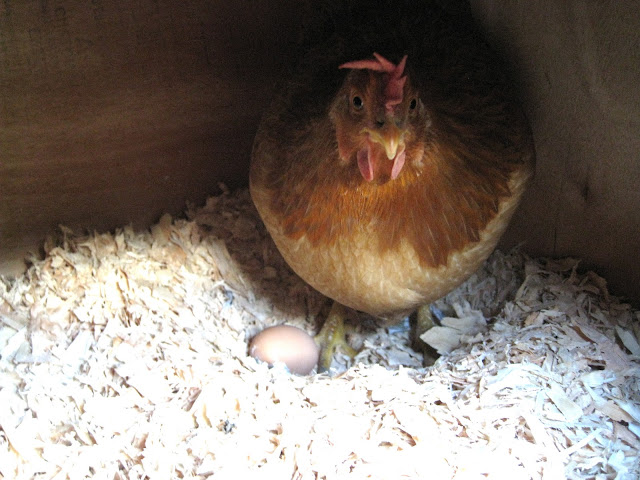 I feel like there should be confetti and horns blowing, champagne and balloons.  Yes!  Today we got our first, long awaited, beautiful egg.  The road leading up to our first egg could be viewed as, well, a, she's gone around the bend and is completely off her meds, foray into chicken keeping.  I admit, I do get a little obsessed.  It's been the Swedish Hospital maternity suite of chicken coops.  Decorative lights, heat lamps, fresh fluffy bedding every day, meal worms, fresh romaine lettuce, flower and mint plants and sweet talking; those chickens have a pretty good gig going.


My latest concern was that the nesting area was not dark enough because of the window in the door that opens to the nesting box.  And so today, I bought some taller plants to put in the window box on the door to help block the light.  After walking Pacino, I went to plant the new plants and saw Ruby sitting in the nesting box.  I quickly scurried away, lest I spooked her into not dropping her egg.  I went into my office and tuned into the chick cam.  Ruby was turning in circles and then suddenly jumped out of the box.  She stood at the door to the outer area of the coop, squawking, almost in complaint.  I decided maybe she thought the box was too small and could not get comfortable in it.  So, out I went to remove the nesting box, and add more wood shavings for a fluffy nest.  Then back into the office I went, chick cam on, plugging along on my work.  Ruby scratched and turned and turned in her nest, finally settling down.


She sat quietly for about 45 minutes, and then suddenly, I heard a plop.  I looked at the chick cam feed and there it was, Ruby's first egg.  She stood over it, looking between her legs, pushing it a little with her beak, almost like she was wondering what it was.  After a few minutes, she sat on it, and then another 30 minutes, she gathered a few wood shavings around it and left to go about the rest of her day.


In this interim, I had a conversation with Chris whereby I professed I could not take the egg from Ruby.  How could I take her egg?  Let alone eat it?  She is sitting on it and caring for it.  Chris quickly excused himself from the phone, clearly having more important business to attend to than trying to talk me into stealing Ruby's egg.  I left to pick up the girls from school and left the recording of the chick cam going so the girls could see the whole event.  When we returned she was back with her flock, egg left safely in the nest.  Stella carefully removed the egg and placed it into the carton she had made. 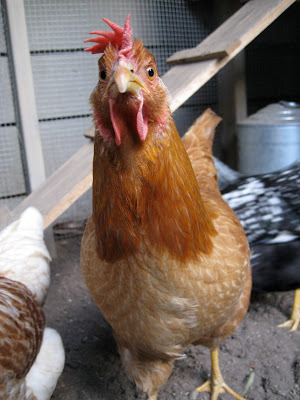 Ruby looking at me like "what'd you do with my egg" 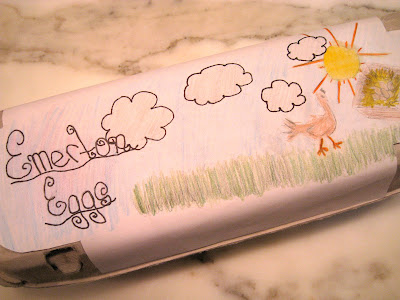 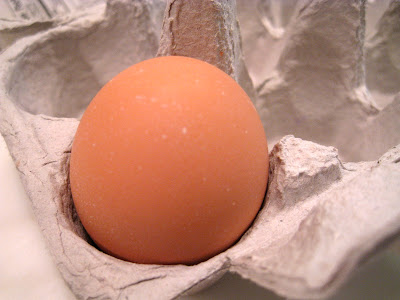 We gathered around the counter like we were unveiling an excavated treasure.  I cracked the egg open and we all cheered.  It was a double yolk.  What does that mean, Chris asked.  We don't know... but a double yolk sure seems like it should be a sign of good fortune. 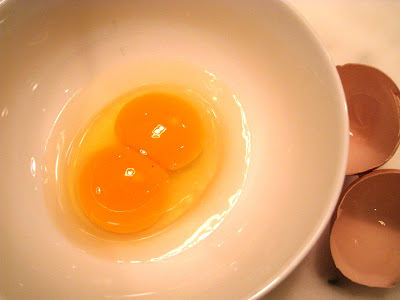 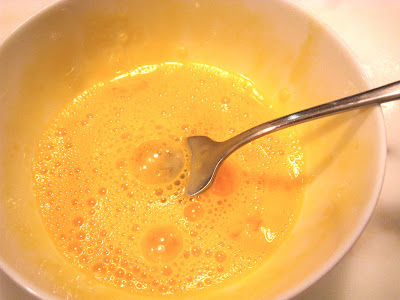 The yolk was almost bright orange in color.  The photos do not do it justice.  We agreed on a scrambled egg because it was what everyone would eat.  I scrambled it in browned butter and a little salt. 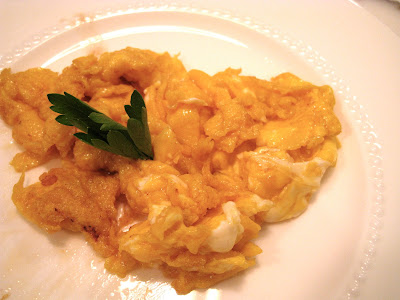 Stella said, raising chickens is so exciting!  Thank you Ruby for your wonderful egg!  It was spectacular!