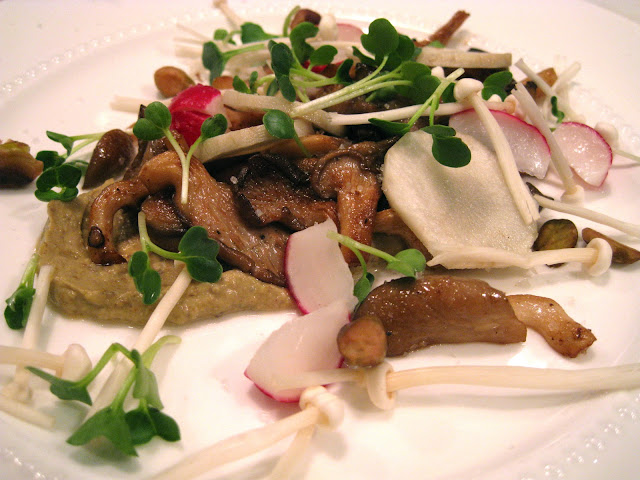 Sometimes I think Chris and I have food ESP.  I suppose it can be attributed to having known each other for so long.  But I often think I'm a little psychic, while I think Chris may just think I'm a little psycho.  I woke up this morning and, as is often one of my first thoughts, wondered what we should have for dinner tonight.  My answer was sushi dinner.  When Chris came down to the kitchen, I asked him that very same question, to which he replied, Japanese and something special from David Chang's cookbook.  And so it will be. 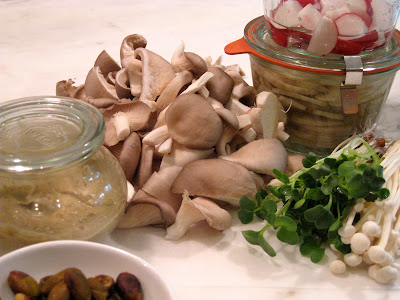 
Toss radish wedges with sugar and 1/2 tsp salt in a small bowl.  Cover and set aside until ready to use.


Bring seaweed soup and mirin to a boil in a medium saucepan.  I should point out Chang uses traditional Dashi or instant dashi.  I didn't find the instant and decided to skip the step of making my own dashi.  Add pistachios to the saucepan, boil for 1 minute, then turn heat down to simmer and cook the pistachios until very tender, about 1 hour.


Drain pistachios, discard liquid.  Reserve 1/3 of the pistachios to use in the finished dish.  Put the remainder into a blender with the water and process until smooth and thick.  Scoop out and set aside. 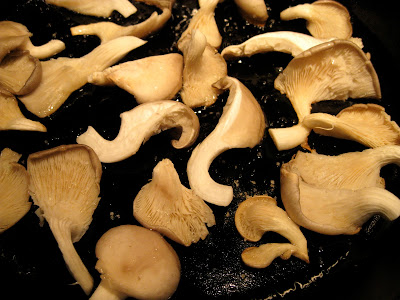 Heat 1 tbsp grapeseed oil in a wide skillet over medium-high heat.  When oil is hot, add a batch of mushrooms one at a time, not crowding the pan.  Season with salt and pepper and sear mushrooms, undisturbed for 1-2 minutes, turn over and sear the other side for another couple of minutes.  Remove the seared mushrooms and repeat with remaining mushrooms adding oil to the pan as needed. 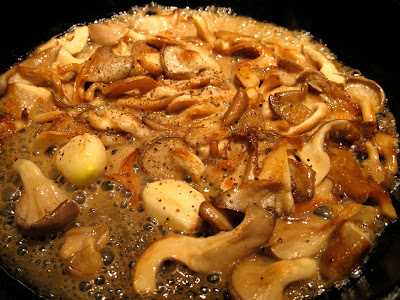 When all the mushrooms are cooked, return them to the pan along with the garlic and butter. When butter is melted, add the vinegar, turning heat to high, tossing the mushrooms until most of the liquid is boiled away.  Remove from heat, discard the garlic.


To serve, smear a heaping tablespoon of the pistachio puree across each plate.  Top with a portion of the mushrooms, scatter some radishes, picked sunchokes, pistachios and enoki mushrooms on top.  Finish with a few microgreens and a sprinkle of sea salt. 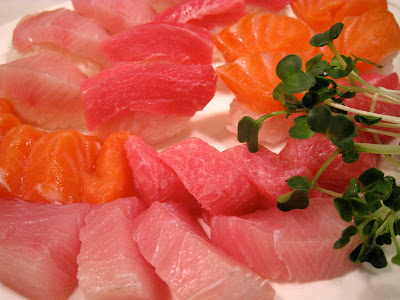 We had our salad with salmon, otoro, and hamachi sushi and sashimi and some lovely ice cold sake.
The mushroom salad was wonderful.  Such ingenious pairing of ingredients.