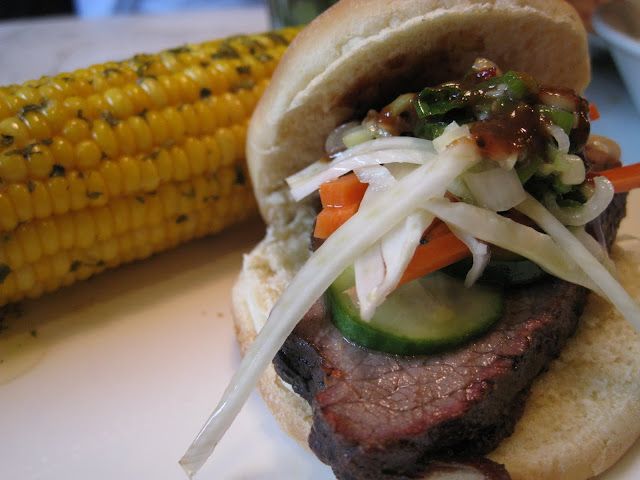 Chris fired up the Weber smoker at 8:30 this morning, early enough for a Saturday that he set it up last night so that all he had to do was wake up and light it this morning.  It was early enough that neighbor came down to make sure our house wasn't on fire.  Our morning looked something like this...smoker wafting gentle plumes of cherrywood smoke, dog lying on the couch next to me on the patio watching the chickens intently, chickens pecking away at their morning treat of cabbage, Chris studying his brisket recipe and sipping coffee, Stella telling Pacino what a good boy he is, Maggie sleeping in, and me typing on my laptop.  It was a good morning.
For the brisket:
One 4lb beef brisket, with some fat left on top
Dry rub - I used the one from the first smoking session
1 Cup beef stock
Last night, Chris put a healthy coating of dry rub on the brisket and place it uncovered in the refrigerator overnight.  This morning he lit the huge mound of charcoal and waited for them to grey.  Once they were grey, he placed several large cherrywood chunks on top of the coals.  The water pan was filled, and then the brisket went on, fat side up.  The smoker was kept at 225 for the entire smoking session.  More coal was added to the smoker throughout the day to maintain the temperature.  The brisket was left on for about 6 hours and then was placed in foil wrap with the 1 cup of beef stock and returned to the smoker for another 2 hours.  After that, at 5:00pm, the brisket was removed, wrapped in large towels and placed in a cooler to keep warm, while keeping it from cooking further, until we were ready to eat.
We had our brisket on a potato bun with pickled cucumbers, carrots, and fennel, ginger scallion sauce, and a little bbq sauce.   Can't complain.
Email Post
Labels: Beef