3 Cup Chicken - Or A Variation Thereof 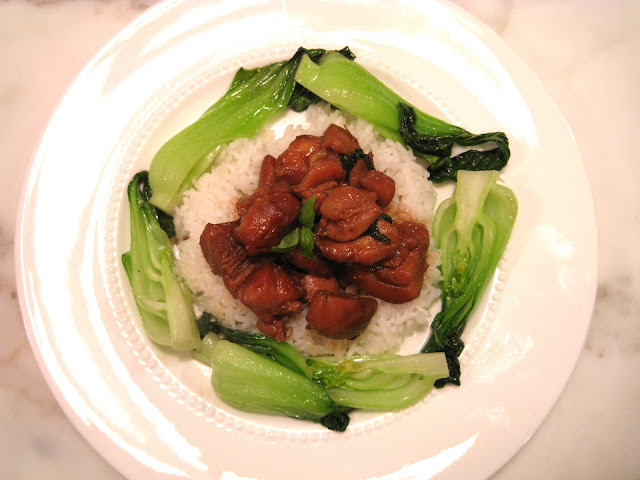 Braising meats in soy sauce and variations thereof is a go-to method in my Chinese home cooking.  The first time I had really good 3 Cup Chicken was years ago at Shanghai Garden in Issaquah.  My dad was friends with the chef there and after having the dish, I spoke to him later on the phone about how it was made.  He advised toasting ginger and garlic in sesame oil and then frying the chicken until slightly browned.  Add one cup each sugar, rice wine and soy sauce and braise.  Finish with fresh basil leaves.  Easy enough and oh so delicious.
Other sources say to use one cup each soy, wine and lard or sesame oil.  One cup sesame oil seems unbearably over the top as does the lard.  So, you know experimental me will have to do a little altering of the recipe each time I make it.
A couple notes here...I should mention that I normally prefer to make this with bone in chicken, and the best would be to use a Cornish game hen cut into bite sized pieces.  But for ease of eating and my kids new braces, it's boneless tonight.  And, the 3 cups does not, in my case, mean 3 traditional measuring cups, but rather equal parts.


Melt lard in a medium braising pot over medium heat.  If you must, use regular vegetable oil.  The lard, though verbally unappealing, gives the chicken a nice glazed look and the sauce a richer flavor.  Add sesame oil to lard and toss in garlic and ginger.  Fry until fragrant but not browned.  Turn heat up to medium high and add in chicken.  Fry the chicken until just cooked on the outside.  Add in soy, wine, sugar and water.  Bring to a boil, turn heat down to medium low, cover and let braise for 15 minutes.  Uncover, turn heat up to achieve a rapid boil for another 3 minutes.  Stir in basil leaves and serve with a nice bowl of rice.
Email Post
Labels: Chicken Chinese