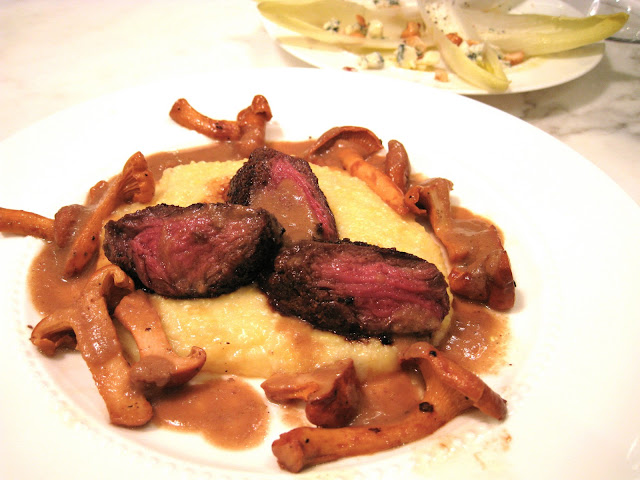 Over the summer, I was given the opportunity to purchase some all natural grass fed beef from a friend of a friend who had raised two steers on a farm in Mount Adams.  Done and done!   The beef was going to be ready in the fall, and this Tuesday, I picked up my order.  Tonight, I'm testing out my first cut, the hanging tender, onglet, or otherwise known as the hanger steak.  When you are able to find this cut at the butcher, it will sometimes be trimmed up into narrow long steaks, or sometimes it will be in one whole, large piece.  Mine came in the one, whole piece.  No problem, just a little trimming to be done.  You could leave it whole, but there is a thin sinewy strip in the middle which will be tough and chewy.  So, be prepared for that.
I defrosted the steak over a period of two days in the refrigerator.  Last night, I removed it from its wrapping and split the hanger steak in two, removing the sinewy strip in the middle.  I laid the strips on a plate, uncovered, in the refrigerator until tonight.  Make sure they remain dry, using paper towels to soak up any liquid that may escape from the meat.
The hanger steak is golden on its own.  It will be flavorful and delicious.  But as we are at the Emerton house, sauce is king.   The sauce.. what to do.  I spent a good amount of time contemplating this.  It's a good pastime anyway, driving, laying in bed, food shopping, showering.. all good opportunities to think about sauce.  In the end, I decided to do a port and mushroom sauce. 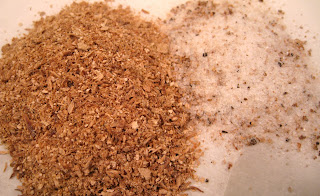 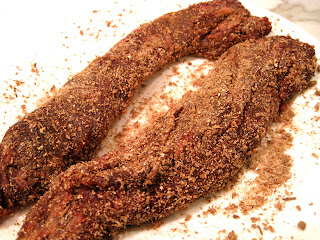 I ground some dried porcini mushrooms in a coffee grinder and mixed it with truffle salt and coated the steak generously with the porcini truffle salt right before grilling.  Fry the steak over searing hot heat and serve it rare.  Hanger steak is very lean and as such will only be tender if it is not over cooked.  We used the cast iron skillet on top of our stove with a little bit of peanut oil. 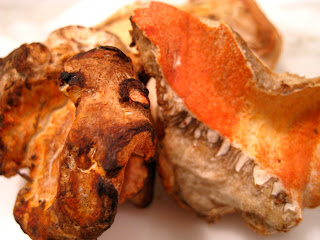 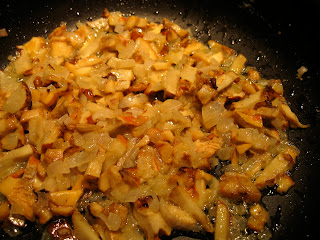 Saute the shallots in the butter until softened.  Add in mushrooms and saute until mushrooms are cooked through.  Deglaze pan with port, let boil for a minute, then add in beef stock. 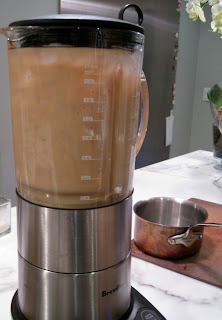 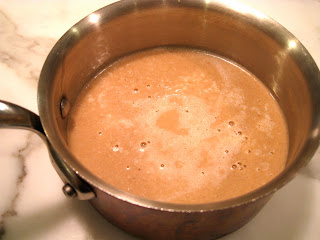 Transfer everything to a blender and liquify the sauce, blending for a good minute.  Be careful with using the blender when the liquid is hot.  It may blow the top off.  My blender has a steam releasing feature in the cap, so that I can blend hot liquids with abandon.  Return the sauce to a small sauce pan and let simmer for another 5-7 minutes.  When ready to serve, drizzle with a little white truffle oil.  The sauce WAS king. 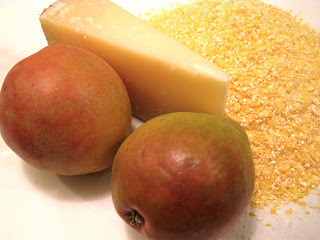 With the steak, I served creamy grits with Seckel Pear and 12 mo Manchego.  Cook grits according to package instructions, using chicken stock.  Peel and finely dice the pears and saute in a little butter.  When grits are almost finished cooking add in the pear.  When ready to serve, stir in grated Manchego and a tablespoon of butter. 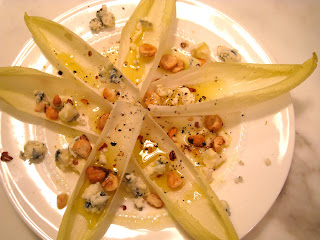 The salad tonight was simple, clean and crisp.  Lay out Belgian endive leaves, sprinkle with some bits of hazelnut and chunks of Maytag blue cheese.  Drizzle with a champagne vinegar vinaigrette, which is simply 3 parts olive oil to one part champagne vinegar and a drizzle of honey.  Finish with freshly ground black pepper.