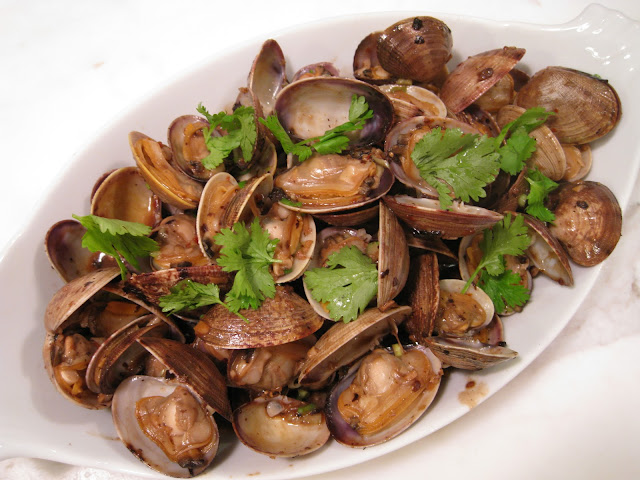 When we were living in Taipei, we would go to these beer houses with large groups of friends.  Everything on their menu was there as an accompaniment for beer... or in fact, to make you want to drink more beer.  These beer houses ranged from little holes in the wall to large, elaborate multi-level establishments.  My favorite one was just outside of the city, had a large outdoor patio and was next to a rice paddy.  Dimly lit, the warm night air,  icey cold beer, good times.  Among other dishes, we would always order these baby clams.  We used to call it the plate of empty clam shells, though it mattered to us not.  They were spicy, salty, sweet, deliciousness and we rarely found any actual clam meat.  The clams were size of dimes and in the cooking of them, most of the clams fell out of the shells.  We'd slurp the fabulous sauce out of the shells along with the clam if were lucky enough to get one, and drink beer, lots of beer. 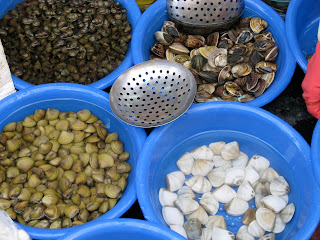 I took this photo in Taipei, at a street market, last December.  Clams on the bottom left are about twice the size of the ones from the beer house.

2.25 lbs Live Manila Clams
1 tbsp fermented black beans, soaked, drained and smashed
1 tsp black bean garlic sauce
2 tsp soy
1 tbsp rice wine
2 tsp sugar
1 tsp minced garlic
1 tsp minced ginger
1/2 tsp red pepper flakes
1 tbsp sliced scallions
Rinse clams, but do not soak in water.  In a hot wok, saute garlic, ginger and red pepper flakes until fragrant.  Add in clams and smashed black beans.  Toss several times to fry the clams.  Add in remaining ingredients and continue to toss the clams.  As they cook and open, transfer them to a dish.  Once all clams are cooked, simmer sauce another minute or so and add a thickening agent of cornstarch and water to thicken the sauce slightly.  Discard any clams that do not open.  Return the clams along with the sliced scallions to the wok and toss quickly just to coat.  Salty, briny, and fresh.  Oh so good.
Email Post
Labels: Seafood