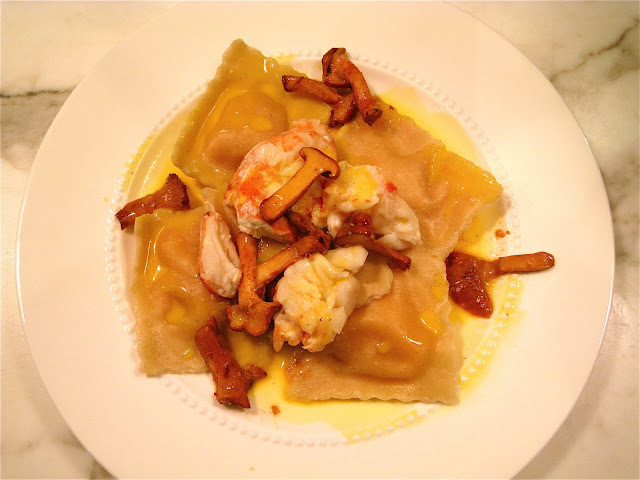 The freezer is getting a little full, so time to do a cycle of revisiting some of the goodies that have been stored away in there.  What to pair with that yummy butternut squash ravioli from a couple of weeks ago.  I was thinking fish this morning and remembered of how excellent that vanilla saffron sauce was from back in May.  And wanting always to try something slightly different, I decided to go with lobster and a slight variation on the sauce. 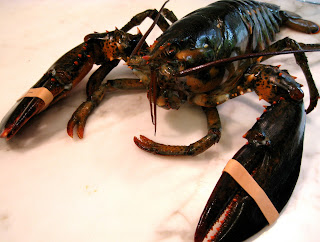 1 live, 2 pound lobster
Steam the lobster for 4 minutes using 3 cups water in a large pot.  I am choosing to steam/boil the lobster because I will use the liquid for the stock in the vanilla saffron sauce and I don't want the liquid to be too diluted.  Remove the lobster, and pull of the claws and return them to the pot for another 2-3 minutes.   The meat will not be fully cooked so that you can finish it when ready to serve.  Once the lobster is cooled, remove all the meat from the tail, claws and knuckles.  Pull the tail away from the body.  I use a good pair of kitchen scissors to cut the tail shell open.  Make sure you remove the vein running through the top of the tail just under the top of the meat.  It's the same procedure as removing the vein from the shrimp tail.  Use either a hammer or the heel of your knife to break open the claws.  Pull off the lower pincer and remove the cartilage that should be attached to it.  Hopefully, your claw will remain in one piece, but not to fret if it does not, as you may want to cut them up anyway.  Use the scissors to also cut apart the knuckles and remove that meat.  Cut the tail meat into large bite sized pieces.   Clean the head/body of any roe or tomalley.  Keep all the shells for the lobster stock.  The cooking and cleaning of lobster can be done ahead of time.  Bring the lobster back to room temp when you are actually going to cook to serve.


For the lobster stock:
Using the liquid left from the cooking of the lobster, and all of the shells, add 1 clove of garlic, 1 shallot, bay leaf, sprig of thyme and 3/4 cup white wine to the water.  Bring to a simmer for about 10 minutes and strain reserving liquid.  It should yield about 2 cups.  I saved one and put it away for another use.

1 Cup lobster stock
1/4 tsp saffron threads
2 tbsp heavy cream
6 tbsp unsalted butter, cut into 5 pieces
Scrape the seeds from the vanilla bean into a pan adding the stock, vanilla pod, and saffron.  Let simmer until reduced to about 1/2 cup.  Strain sauce through a fine sieve.  Add in the cream and bring to a simmer.  Then slowly whisk in the butter a piece at a time.  Be careful with the heat so not to boil the sauce again, or the butter/fat will separate from the sauce.
To finish the lobster, melt a few tbsp butter in a saute pan, over med/low heat.  You don't want to fry the lobster, but rather just kind of poach the lobster gently in the butter until it is warmed and cooked through.
The frozen ravioli can be thawed laid out on paper towels in a single layer or you can just boil them directly from frozen state, accounting for longer boiling time if frozen.  Serve ravioli with a few pieces of lobster and the vanilla saffron sauce on top.  That's good living!  Sauce, divine.  Lobster, sweet.  Ravioli, just as good as the last time, maybe even better with the vanilla saffron sauce.
Email Post
Labels: Pasta Seafood Stocks and Sauces