Beef Tenderloin Roasted in Herb-Infused Crust and a Mushroom Tart 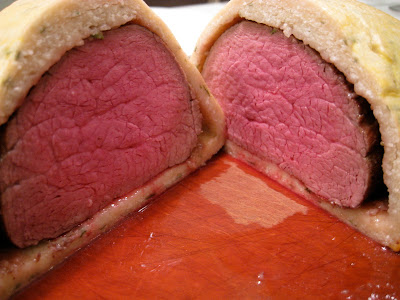 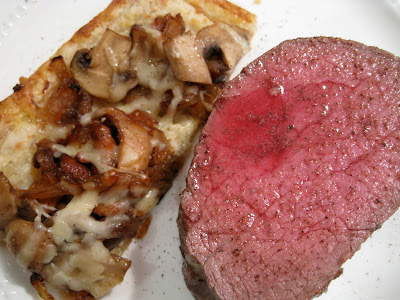 This recipe is from one of the first cookbooks I owned, Simply French, Patricia Wells presents the cuisine of Joel Robuchon.  It's been many years since I've made this...too long, in fact, to say if it is really as good as I remember it to be.  Tastes have changed and so has the palate.  But when steak was requested for dinner, I started to scour the ole memory banks and remembered this unique preparation.  It's a bit of an intimidating recipe given that you don't know if you've succeeded or failed until it's too late to really correct it.  The tenderloin is cooked inside a dough which prevents, of course, visual confirmation, of how the beef is cooking.  Here, timing is of the essence.  I've adjusted the recipe slightly as follows.  Start a day ahead or at least 3 1/2 hours before serving. 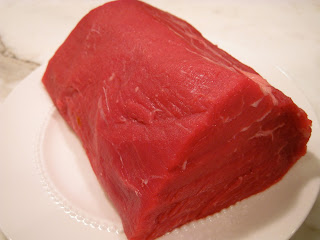 Make the salt crust using a standing mixer fitted with a paddle or by hand in a large bowl.  Mix together salt and herbs.  Add in egg whites and 2/3 cup water and mix until thoroughly blended.  Add in 2 cups of flour, a bit at a time, and knead until the mixture forms a firm dough.  You may not need all the flour, or you might need more.  The dough should be firm, but not too moist, or the beef will steam and not roast.  Cover with plastic wrap and let rest for at least 2 hours or up to 24 hours.
Heat oven to 375f.  Dry the beef well on paper towels.  In a large skillet over medium high heat, add butter and oil.  Sear the beef on all sides, about 2-3 minutes per side.  When finished, lean the beef on a salad plate turned upside down on a large platter.  This will allow air to circulate while the beef rests for 5 minutes. 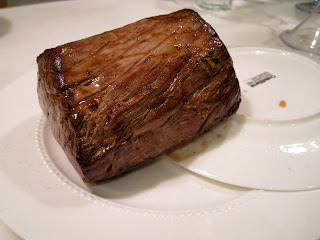 Meanwhile, roll out the dough on a lightly floured surface, to about 12" x 16" or large enough to enclose the beef.  In a small bowl, combine the egg yolk and 1/2 tsp of water to make a glaze for the outside of the dough. 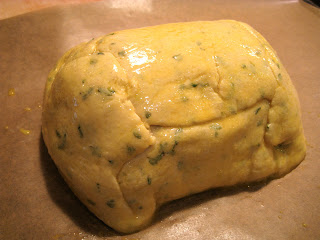 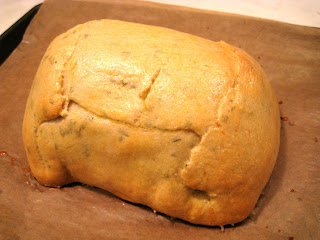 When ready to bake the beef, wrap it in the salt crust making sure it is well sealed.  Place the wrapped beef on a sheet of parchment paper on top of a baking sheet.  Brush the entire surface with the egg yolk glaze.  Place the beef in the oven and roast for 15 minutes per pound of beef for rare, adding another 3-4 minutes per pound for medium rare.  The crust should be light golden brown.  Let the beef rest in the crust at room temp for 1 hour before carving.  This will not only continue to cook the beef a little, it will also allow the juices to be reabsorbed into the meat, making it more tender.
To serve, slice off the crust on one end and remove the beef and discard the crust.  As you may have noticed, we are a family of sauce lovers.  Would the tenderloin wow on its own?  The tenderloin soaked up all the flavors of the salt and herbs, but honestly, was over-cooked for me, a rare gal.  This was medium rare.. and well, I like mine with just a quick introduction to the heat... knock the horns off and bring it on.  Still, very flavorful and tender.
Mushroom and Caramelized Onion Tart
I am still feeding my chanterelle mushroom addiction.  A savory puff pastry tart seemed just the right thing tonight.
1 sheet ready made puff pastry
1 lb mushrooms ( I used chanterelles and white button)
1 small onion sliced
1 cup grated gruyere cheese
½ cup ricotta cheese
Heat oven to 400f.  To make an edge on the puff pastry, score it with the tip of a knife about ½ inch in from the edge.  Bake the puff pastry on a piece of parchment paper on top of a baking sheet and par bake the pastry for 10 minutes.
Meanwhile, caramelize the onions by sautéing them with a little bit of olive oil, over medium heat until they are soft and golden.  Season with salt and pepper.
In a separate pan, sauté mushrooms in a bit of olive oil.  Season with salt and pepper. 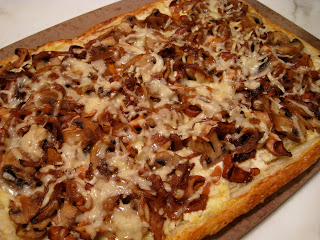 To assemble the tart, brush the edge with and egg wash of egg yolk and ½ tsp of water.  Mix together the ½ cup ricotta with ½ cup of gruyere cheese and the sour cream.  Spread it evenly onto the puff pastry.  Distribute evenly the mushrooms and the onions onto the tart.  Finish with the remaining ½ cup of gruyere cheese.  Bake in the oven at 400f until cheese is bubbling, about 12-15 minutes.  Still in love with chanterelles.  Oh so good.
Email Post
Labels: Beef