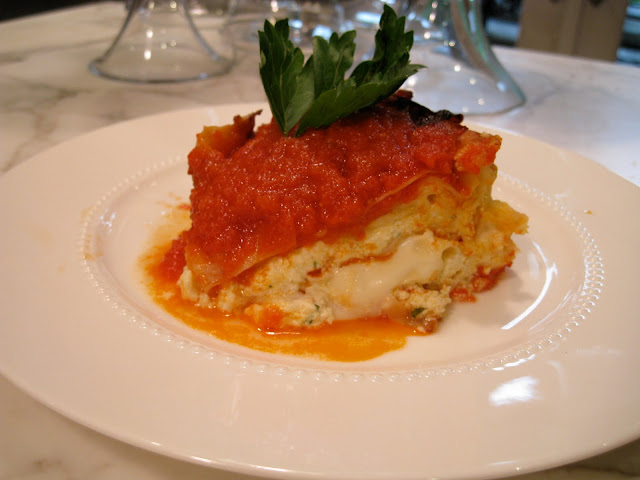 I say holy moly because this is some labor intensive lasagna.  Cafe Lago may best be known for their delicate yet luscious lasagna.  Sweet marinara, ethereal pasta, little did I know what work it is to make.  I am not one unaccustomed to spending a day cooking, but perhaps it was the word lasagna that threw me off.  I've maybe only made 2 or 3 lasagnas in my lifetime, but somehow I was of the belief that it was a no-brainer.  Such is not the case with Cafe Lago's recipe.


Part of the chore was trying to follow the recipe in every detail.  That in itself takes a lot of time.. constantly reading, going back, checking to make sure I'm doing it right.  Life is so much easier when you can wing it, which is my normal M. O.   I was doing my best to follow rule 2 and 3 from the recipe:
Second rule: Don't cut corners. What would happen, say, if you cooked the ultra-thin pasta sheets all together instead of single piece by single piece? "Bad idea," Viladas responded in an eye-blink.


Third rule: Try not to tinker. "If you put meat in this pasta, it totally ruins it," Viladas said.
But it seems I did tinker a little.  I kind of went half and half with their marinara recipe and mine.  I had a fair amount of fresh Roma tomatoes, so I used half fresh and half canned and I did not mill the tomatoes, I just pureed them in a food processor.  The food mill would have been even more work.
I will be interested to see if the pasta is the same in taste and texture as the Marcella Hazan recipe I normally use.  Lago's uses water and a drizzle of olive oil in addition to eggs, while Hazan's is eggs only.  From a pre-cooked standpoint, I prefer the texture and feel of Hazan's.  But Lago's was easier to make because of the use of the food processor.   Since my rolling of the dough was not perfect to size, I found myself doing a little trimming with each sheet of pasta. But no big deal there.
Other than that, I stayed on course and did as the recipe stated.  Once again, the sauce steals the show!  The lasagna was light and fluffy.  Stella said it tastes like cake!  If I had to pick, I'd say I prefer the all egg pasta.  More depth of flavor, better elasticity and body.  But not having tried lasagna with it, it's difficult to say whether it would have held up as well with the boiling and layering in large sheets.  Would I go to the trouble of making it all again?  I can't say for sure.  I could skip the ricotta and bechamel and go straight with the just pasta and marinara.  That is perfection in itself. 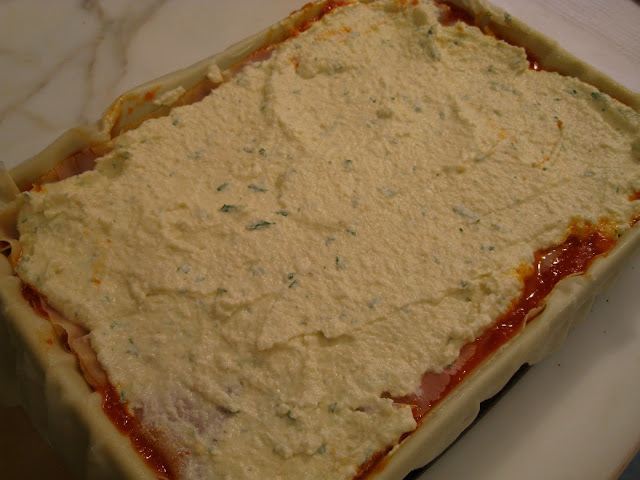 2nd Layer of ricotta mixture on 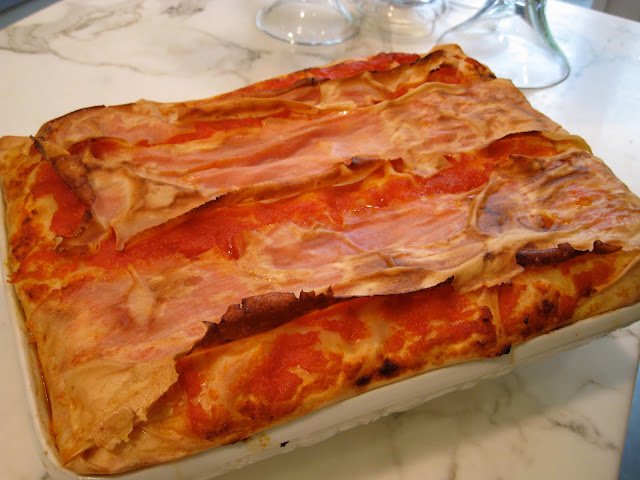 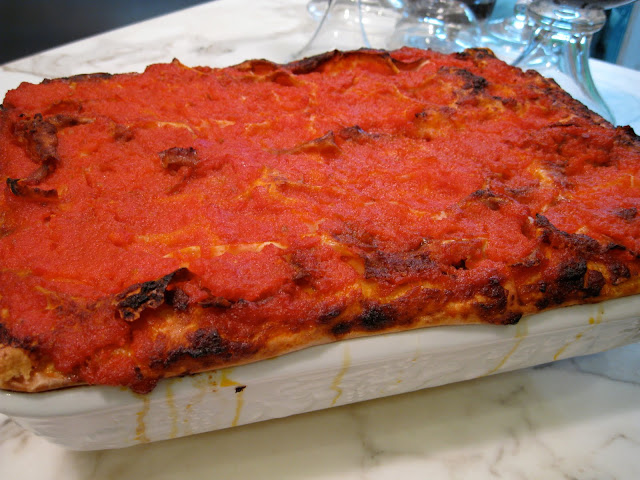 Out of the oven after 2nd baking 350f for 1 hour
Email Post
Labels: No Meat Pasta