Steak with Habanero Sauce and Shrimp with Sweet Tomato Sauce

I fell short with a clever title today mainly because of a little self shame.  I had prepped my thought-out Cinco de Mayo meal and then sat down to write.  I realized I never really looked into what made this a holiday.  Trapped like a deer in the headlights with Coronas and lime displays in the grocery store, I went about my shopping every year thinking it was just a good reason to make Mexican food.  The holiday, is in fact, to commemorate the Battle of Puebla in 1862 where the Mexican army defeated the French army.  And it appears we celebrate it here in the U.S. more than they do in Mexico.  Not that we commercialize our holidays or anything... just looking for another good reason to take a shot of tequila and party on I guess. 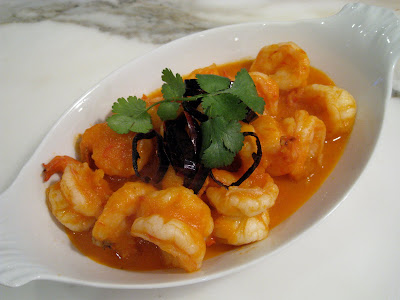 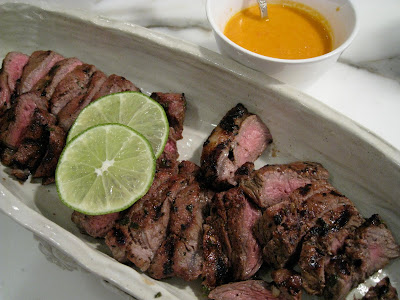 So, on with the food.
The sauce for the steak and the shrimp came from the same base.
4 Ripe Tomatoes diced - try to remove most of the seeds
1/2 Sweet Onion diced
1 Large Garlic Clove minced
1/4 tsp Tomato Bouillon with Chicken
1/4 Cup or so of water
Saute the onion and garlic in olive oil until softened.  Add tomatoes and saute for another 5 minutes or so.  Puree in a blender with the bouillon and water, adding a bit at a time to achieve a thick consistency, but not pasty.
Remove half the sauce from the blender and place back into the saute pan and reserve for the shrimp.  To the other half, add one very small habanero.  Or is you can only find larger ones, use only half.  Puree again.  Place this portion of the puree in a separate sauce pan and add 1/4 cup  whipping cream.
Clean and devein large shrimp.
I purchased top sirloin and pounded it to a 1/4-1/2" thickness.  Then marinate in olive oil, lime zest, lime juice, chopped cilantro, minced garlic and salt and pepper.  Place in refrigerator for an hour or so.
Grill the steak on a smoking hot grill 1-2 minutes per side.  Bring the sauce to a boil and reduce a bit.  Serve on the side.  It will be pretty spicy.
Heat the sauce for the shrimp to a boil.  I wound up adding quite a bit of water to it to thin it.   Saute the shrimp in a little olive oil until it starts to pink.  Add the shrimp to the sauce and cook for another couple of minutes until done.  The shrimp was the hit despite the initial hesitation from the girls that it was going to be spicy based on the color of the sauce.
I skipped my tequila shot.  But I did toast to the always friendly people of Mexico I've met over the years.
Email Post
Labels: Beef Seafood Stocks and Sauces