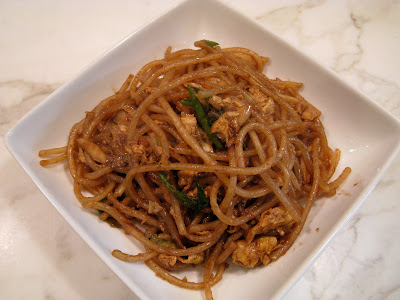 This is a dish a friend asked me to try to replicate.  My intention was to go to the restaurant and try it first as I have no idea what it is supposed to taste like.  Looks like I couldn't wait that long and needing an idea for dinner tonight, decided to go ahead and make some noodles with the main ingredients described to me: round rice noodles, mushrooms, green onions and duck egg. 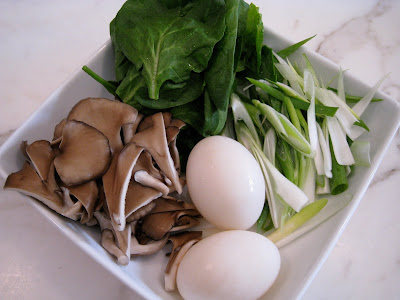 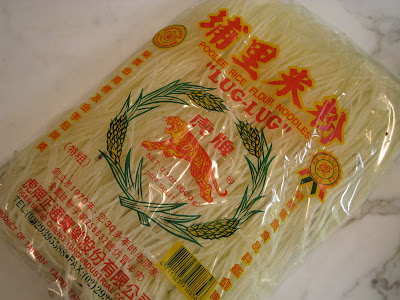 Boil the noodles in a large pot of water for about 6-7 minutes, stirring periodically.  These were pretty thick round noodles, like a thick spaghetti.  Since the noodles were all linked together and in quite a large rectangle, I broke them in half to fit them into the pot.  This package contained 21 oz, I used half of it.  Drain, run cold water over them and drizzle some vegetable oil and give them a stir so they don't stick together.
Combine the oyster, sweet soy, dark soy and hoisin sauce with the water and mix well.  I added a portion at a time and tested for seasoning since I had not made this before.
First scramble the eggs in a little oil over medium heat.  Remove and set aside.  I got my duck eggs from University Seafood and Poultry.  The shells of the eggs were very thin and porcelain like.  The yoke is huge compared to the white.
Reheat your wok over high heat, add in the vegetable oil until smoking hot.  Toss in the scallions, mushrooms, spinach and garlic and fry for a minute.  Turn the heat down to medium high and toss in the lard, noodles, duck eggs and the sauces and water.  I'm using lard as it was an ingredient suggestion on the back of the noodle package.  I figured that's probably what makes the noodles taste so good! It gave a nice sheen to the noodles.  Stir fry a few minutes more until the noodles are fully cooked.
As a side note on fire temperatures, I should say I am using a dedicated wok burner that fires higher btu's than your normal burner.  So, for this type of cooking, you probably need your flame on high the whole time, unless you have a wok burner.
We liked the texture of the noodles.  Firm and a little chewy.  I have no idea if the flavor was correct, but we liked it.  As a post note, I would not add in the egg until the very end as the stirring with the noodles broke them up and caused them to coat the noodles a bit. 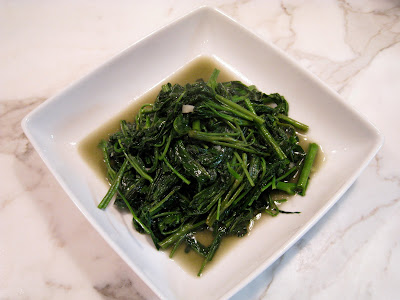 On Choy, or Kong Hsing Tsai, meaning empty center vegetable in Mandarin, is another favorite green in our house.  We ate this all through Taiwan last December and it looks like it's finally back in season here.  I've seen it called swamp cabbage in Asian markets or On Choy in Cantonese.  The vegetable is long and slender with small narrow leaves.  I failed to photograph it before I cut it up.  Wok fry with a good helping of vegetable oil, a couple cloves of garlic and some salt.  My dad used to eat it dipped in white vinegar and that's how I like to eat it as well.   Another fabulously clean and crispy veggie.  Gotta love those leafy greens!
Email Post
Labels: Noodles Veggies