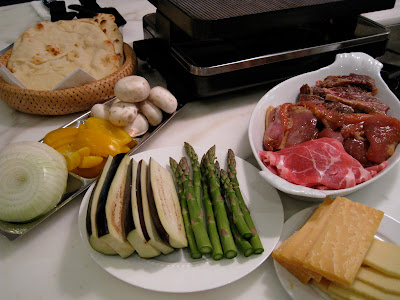 We were first introduced to Raclette years ago by our friends who had spent several years living in Switzerland.  First time out, we were hooked.  Any meal that gathers you around a table and makes you linger to enjoy each other's company, or share the occurrences of your day, becomes a favorite in our house.  Over the years, I admit we've strayed from the traditional meal.
Raclette is a type of cheese and also a meal most commonly featuring cheese.  While we LOVE cheese, our raclette meal is centered more around the meats and vegetables grilled on top of the raclette grill.  When the kids were younger, I was so afraid they would burn themselves.  But they loved it... their first introduction to "cooking".  There is always a cheer when raclette is announced at our house.
The meats we cook vary, but we always have chicken marinated in a teriyaki sauce.  Not Swiss, I know, but it's a kid favorite.  And then it's usually whatever I have on hand left over in the refrigerator or freezer.  A great way to use up a little this, a little that.  Same thing goes for veggies, but mushrooms and sweet onions are usually in attendance.  As for the cheese, any smooth melting cheese works, though, of course, raclette cheese is most logical.  To switch it up even more, I decided to use some Naan, instead of potatoes.
From a food standpoint, I love raclette because of the variety it affords you.  Eat what you want and cook it how you like it.
Email Post
Labels: Beef Chicken Sidebar Info Veggies