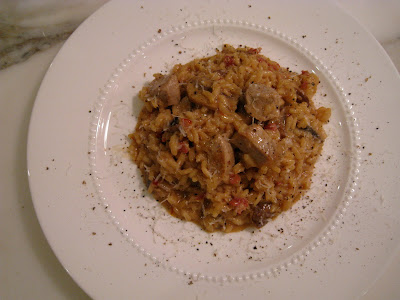 One of my biggest challenges of cooking every night is coming up with new ideas for what to make.  My levels of inspiration and ingenuity cycle as an ebb and flow.  But as I've said before, I can count on Chris for the constant supply of ideas.  I may not always go for them, but they do spur the decision making process.  I texted him late this afternoon, "need dinner idea", to which he responded "risotto".
We happened to be in the vicinity of Bert's Red Apple, a gem of a neighborhood grocery store where you would not expect to find fine cuts of meat and seafood.  Trying to come up with a risotto I have not made, I thought of veal and guessed Bert's would have it.  Sure enough.. I purchased two veal chops and about 1/3 lb crimini mushrooms.
Risotto is one of those wonderful dishes that you can cook the same way, but transform by switching up the other ingredients, just like fried rice.
I deboned the veal chops and seared the bones in a little butter, then covered with water to make a little stock.  To it I added chicken stock to make enough to cook the risotto.  I cut the veal into small 3/4" nuggets and sliced the mushrooms.  I had some thinly sliced pancetta in my refrigerator, so I chopped that up too. 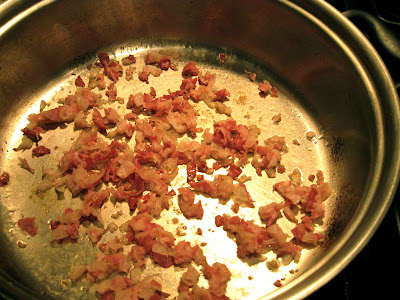 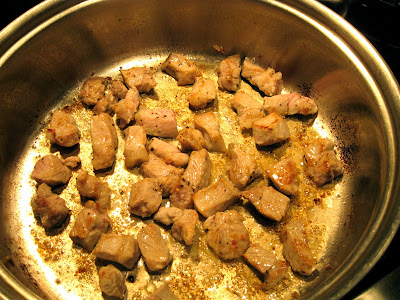 To the fat, I added the veal and fried until browned, and removed and set aside.  Depending on the fattiness of the pancetta, you may need to add a little bit of oil to sear the veal. 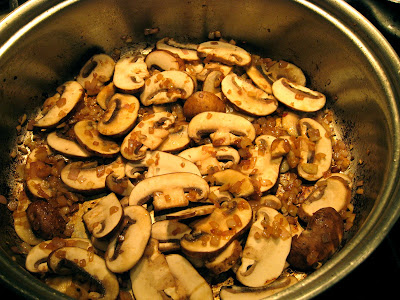 I added a little more oil to the same pan and sauteed 2 minced shallots and 1 minced garlic clove until softened.  Toss in the mushrooms.  Once the mushrooms have softened a bit, add in the risotto and a pinch of saffron (maybe 1/4 tsp), then stir to toast the rice until you almost hear a whistling sound coming from the pan.  Add 3/4 cup white wine and boil until the wine is almost fully evaporated. Then start the broth addition. I put enough broth to cover the rice, wait until almost dry, and then add more and stir. Do this until the rice is to the consistency you like it. 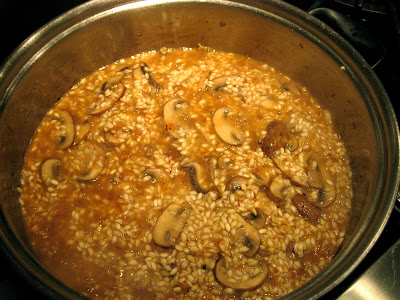 I gave up trying to measure the exact amount of broth to rice. I just try to eyeball it.  It always seems to work out.
Before the risotto is fully cooked, add in the pancetta and veal.  Finish by stirring in a dollop of mascarpone cheese and freshly grated parmesan.  The risotto turns out a lovely brown color because of the frying of the pancetta and veal to start.
Wow, it was good... one of the best risottos we've ever had.
Email Post
Labels: Pasta Rice