The Almond Chicken Project and a Side of Green Beans 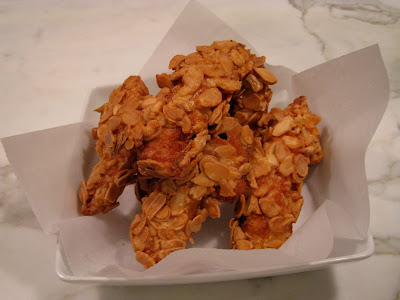 I'd recently been tasked with recreating an Almond Chicken a friend used to have at a restaurant that is now closed.  She said it was their favorite and had wanted to get the recipe from the restaurant, but never got to it before they closed shop.  I have to confess, I've never had almond chicken, so what it's supposed to taste like, I can't say.  But nonetheless, I tried to make it from the description given to me.  The chicken was supposed to be crispy with almonds on the outside and slightly more doughy on the layer closest to the chicken.  She said they never had the sauce with it, and loved the chicken on its own.  I need to get out to a restaurant and have it, but in the meantime, I thought I'd give it a whirl.
1 1/2 pounds chicken tenders
1 tsp soy sauce
1 tsp brandy
1 tbsp corn starch
1 cup Hime Tempura Mix
2 eggs
Water
Roasted unsalted sliced almonds 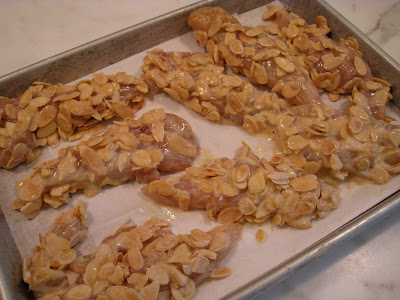 Mix together the soy, brandy and corn starch and marinate chicken for 15 minutes.  Meanwhile, mix together the tempura mix, eggs and enough water to make a batter slightly thicker than that of pancake batter consistency.  Remove chicken from the marinade and place into the batter to coat.  Roll each piece of chicken in the sliced almonds.  I prepared the chicken to this step and placed into the refrigerator until ready to cook.  Fry either in a deep fryer or in a cast iron skillet with oil at 350f until golden, about 5-7 minutes.
I served it with the Octo Vinaigrette sauce I wrote about in a previous posting.  This chicken was not it. I think the almonds I got were too thickly sliced.  I failed on the batter as there was basically no cushion between the almonds and the chicken.  It looked pretty, and tasted alright, but I don't think it was right.  Nothing wrong with it as a dish on its own, but it was not as I envisioned.  The project continues. 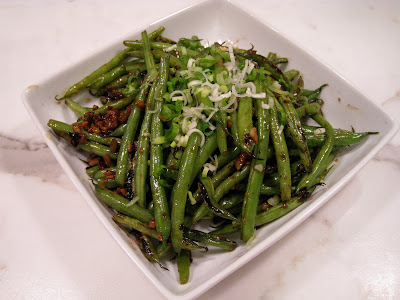 Szechuan Green Beans are one of my favorite dishes.  Traditionally, they are fried in oil and then wok fried with the seasonings, etc.  But I think blanching them in water is just fine.  They are like little string bean candies and I can eat a whole plate of them with just white rice.
1 lb green beans, trimmed
2 Tbsp minced dried shrimp
2 Tbsp minced preserved vegetable
(both these can be bought at your Asian market)
1 tsp minced garlic
1 tsp minced ginger
1 1/2 Tbsp soy sauce
1 Tbsp Sugar
1 tsp white vinegar
1 tsp corn starch
1/2 tsp sesame oil
1/8 cup water
2 green onions, chopped
Blanche the green beans in boiling water for 3-4 minutes depending on thickness of your beans.  You don't want them fully cooked.  Strain and run under cold water.  Heat a little vegetable oil in your wok, and stir fry the dried shrimp, preserved veg, garlic and ginger until fragrant.  Add in the beans and the  remaining ingredients, except green onions and fry until well combined.  Serve with green onions sprinkled on top.
Me, my rice, and my green beans.  Happy!
Email Post
Labels: Chicken Chinese