March 17, What else... Corned Beef and Cabbage 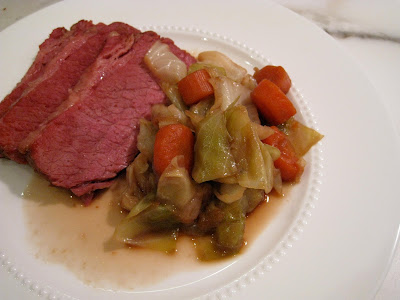 Well, it's St. Patrick's Day, and while no one in our family is Irish, and I'm not even sure that this is what they eat in Ireland on this day, I always make corned beef and cabbage.  The why is because if there's an event or holiday that involves eating something which might be delicious, I am going to cook for it.
I purchased my brisket already brined.  Had I planned ahead, I should have brined it myself.  A goal for next year!  As such, it feels like a bit of an overstatement to say I 'made' corned beef.  I removed it from its wrapping and placed it into a large dutch oven, cracked open a large bottle (22 oz) of Guinness and poured it in, then added enough water to just cover the beef.   I then decided to add in 1/3 of an onion thickly sliced.  Cover, bring to a boil, then turn heat down to simmer for 2 1/2 hours.  Chop up some carrots and add to the pot and boil for 15 minutes.  Then add in the chunks of cabbage and boil for another 15 minutes.  It was very good, but pretty salty. I am a salt fiend, so for me to say it's salty, means it's really salty.  The leftovers were saved for a corned beef hash and poached egg breakfast.  That will be the bigger pay off!
Email Post
Labels: Beef