Devils on Horseback with Fennel, Leek and Potato Soup 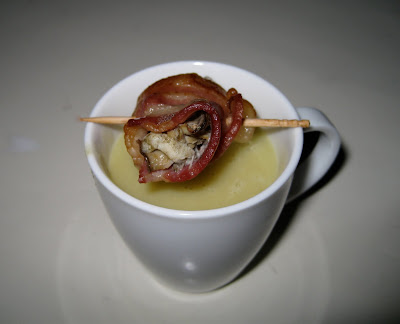 Besides its ease, this little tidbit is worth making just so you can use the name.  Wrap yearling oysters in bacon and bake at 425f.  Use a half slice of bacon for each.  I par cooked the bacon first before wrapping the oysters.
A little shot of fennel, leek and potato soup made good company.  Thinly slice one fennel and one leek (white and tender green part only) and peel and cube two small red potatoes.  I sauteed them in half oil, half bacon fat until softened.  Yes! I keep my bacon fat, otherwise known as liquid gold, in a jar in the refrigerator.  Add two cups of chicken broth and boil until potatoes are break apart soft.  Cool slightly and puree in blender.  Salt and pepper to taste.
Quote of the night... "I'll eat anything if it has bacon wrapped around it!"
Email Post
Labels: Seafood