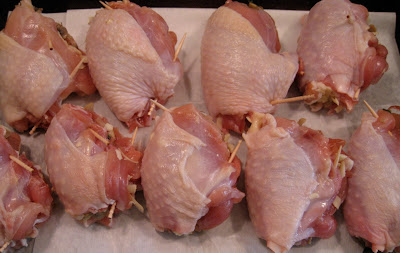 There is an abundance of various cuts of chicken in our freezer right now.  They have all been Costco purchases.  They are wonderfully separated into small packets, sealed in way that makes them easy to defrost.  Of course the best way to defrost anything is to have the forethought and planning to take it out of the freezer and place it in the refrigerator to let thaw slowly and safely.  This is not usually the case with me.  This morning I took out two sealed packets of drumsticks and placed them in a bath of cool water.  This method is quicker and will safely defrost any meat, as long as you are not leaving it for hours on end.  The water will cool as the meat defrosts, but if you leave it too long, the water will eventually come to room temp, and we know we don't want to store meat at room temp.  Also make sure the meat is in a leak proof package as prolonged soaking of meat in water will alter the texture of it.
As I was driving, I was taking a mental inventory of what was in the refrigerator while trying to come up with something new to do with chicken.  I decided to debone the drumsticks and stuff them with prosciutto, mushrooms and a cheese of some sort to hold it all together.
Mushroom stuffing:
8 oz white button mushrooms thinly sliced
1 shallot and 1 garlic clove minced
10 fresh sage leaves minced
splash of white wine
salt and pepper to taste
1/2 cup grated gruyere cheese
Saute shallot and garlic in olive oil until soft.  Add mushrooms and toss to combine.  Cook until mushrooms have softened.  Add wine and cook until liquid has evaporated and add in sage and salt and pepper.  Save the cheese to place on top of the mushrooms later.
Lay each drumstick out and place a half slice of prosciutto, a spoonful of mushrooms and a sprinkle of gruyere cheese.  Wrap tightly and secure with a couple of toothpicks.  After I rolled my second one, I thought that perhaps I should have pounded the drumsticks out a bit to make them thinner.  It would be easier to wrap up and to cook evenly. 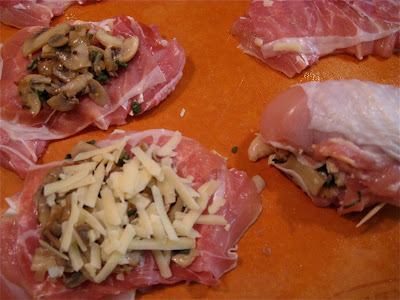 Sear chicken in a large, nonstick pan over medium high heat.  You only need the smallest bit of oil as the fat from the skin of the chicken will cook out.   Depending on the size of pan you have, do in batches if you need to, in order not to crowd.  If they are squeezed together in the pan, they will not brown properly.  Place browned chicken on a baking sheet and set in a 425f oven for 15 to 20 minutes to finish. 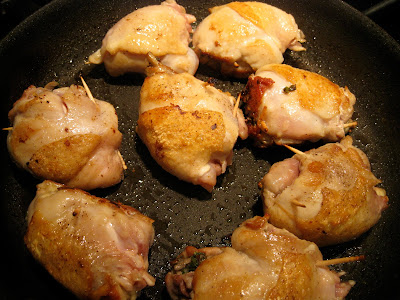 Of course there is a sauce!  We are all about the sauce.  Pour out extra oil left in the pan from searing the chicken.  Deglaze over medium high heat with a bit of white wine, 1/4 cup-ish.  Then add 3/4 cup of chicken stock and let reduce a bit.  I had extra mushroom stuffing left so I threw that in with a teaspoon of balsamic vinegar.  Turn heat down to low, add in a pad of butter and add in a few drops of white truffle oil.
I served this with two favorite vegetables.  Simple roasted potatoes and broccoli roasted under the broiler. 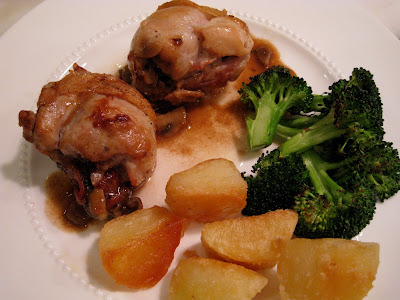 It turns out pounding was not needed.  The chicken cooked evenly and the addition of the balsamic and truffle oil turns your plain ol' chicken into a star.
Email Post
Labels: Chicken