We are headed to NYC in a few weeks and we've all been researching online what we want to do.  Chris has been making his restaurant list and found Ssam Bar serving bo ssam .  Anthony Bourdain raves about it on his Food Porn episode of No Reservations.  Unfortunately, upon further investigation, Chris discovered they will only take reservations for the bo ssam for 6-10 people or you can order it to go for $250.  After describing it in detail to me, I pointed out to him I had David Chang's cookbook containing the bo ssam recipe.  Ooops.
So, it's Tuesday morning and I've pulled out  my eight pound whole bone-in Boston pork butt which has been marinating in equal parts sugar and kosher salt overnight.  The recipe calls for 1 cup of each, but I think 1/2 cup of each was all that was needed to generously coat the meat.
Into the 300f oven it went at 11:30am.   The good news is that after that, the only work to be done for the next 6 hours is basting once an hour.  With simple ingredients, effortless cooking, all I hope for is that I got a quality piece of pork.  Only time will tell.
At 5:45pm, I removed it and let it rest and "mellow out" until ready to serve.  At 6:20pm, I turned the oven to 500f, rubbed a mixture of 1 tbsp kosher salt and 7 tbsp brown sugar all over the pork, and returned it to the oven for 10 minutes. 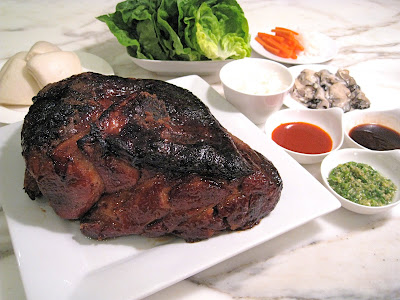 Ssam literally means wrap.  So, the meal is served with bib lettuce for wrapping, shucked oysters, ginger scallion sauce, ssam sauce, and I threw in some steamed buns and diluted hoison sauce for the girls.  Last night, Chris said we should decorate the house especially for this meal.  And now, I see it deserves a special celebration.  Chang describes, "it's like shoulder encrusted in pig candy".   That is the perfect description!  When everything was set on the table, Stella uttered, "it feels like Thanksgiving!"
I have to say, this is the best pork I have ever eaten.  It is beyond good.  Of all the bbq's and slow cooking we've done with various pork shoulders, this is my favorite.  The essential trait of the pork butt is that it is well marbled, but all of the fat had cooked out of it, leaving it succulent and tender.  The ssam sauce and ginger scallion sauce were my favorite.  I say leave the oysters out.  It is not necessary and steals away the sweetness of the pork.  I brought out the pickled daikon and carrots I had previously made. The wrap was delicious, but I think just eating it with white rice and the ginger scallions and ssam sauce was even better.  Can something so humble be so good?  We know the answer is yes! 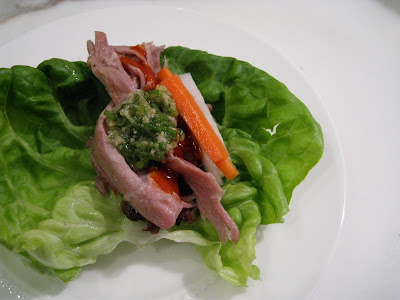