I made a quick Costco trip on Monday for the usual household necessities but we all know a few items can turn into the equivalent of an overnight stay at the Four Seasons.  I am historically bad at eating meat out of my freezer, and as such, I try not to purchase more than I plan on eating in the next few days.  But even then, plans or cravings change.  It's not because I don't like frozen meat, it's because I forget about it, or rather that I love to shop for food, so I like to do it often.  It's probably my favorite thing to shop for, right next to shoes.  But I can justify food purchases. Costco has good meat and great prices, but you have to commit.  I grabbed a two pack of organic whole chickens.  I like the organic, not only because it is organic, but it is not super-sized.  What are they doing to chickens these days?  One went right into the freezer, (will we meet again?) the other one in the downstairs refrigerator.
Today, I decided to marinate and grill it.  This afternoon, I deboned the chicken, but kept it as one whole  bird. 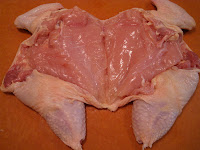 A boning / fillet knife is the best tool for this.  Start at the back and move forward along the bone.  Remove the legs from the body with the bone in and then once separated, it is easier to work the leg bones out.  I left the drumette and wing on, but they can be easily removed and used for another purpose.  You can also ask your butcher to debone the chicken for you or buy pieces of boneless chicken.  But I prefer the skin on, and most boneless chicken is also skinless. 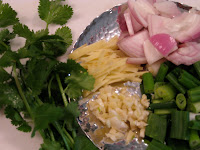 
3/4 Cup Coconut Milk
Several tablespoons of fish sauce
About 1 tablespoon sweet soy sauce
Sliced Ginger
Crushed and chopped garlic
Slice Green Onions
Sliced Shallot
Chopped Cilantro
Juice of one Lemon (I wanted lime, but didn't have any)
Chris grills the chicken on the gas Weber to perfection.  I served it with chopped cilantro and nuoc cham sauce on the side.  With it, we had Thai fried rice and wok fried baby bok choy.  For the fried rice, I took the tenders off the chicken and cut into small pieces.  In the wok, I heated vegetable oil, added the chicken, then minced onions, garlic, ginger and stirred to combine.  Then added the rice and a bit of fish sauce and sweet soy sauce.  When well incorporated, I added bean sprouts and about 20 basil leaves to finish.  I scooped out portions for the kids and added in sliced Thai red chilis for me  and Chris.  At the last minute, I decided to fry an egg to place on top.  From the table came "This is aaaawesome!"  As Chris said, "if you're ever bored with chicken, have this one!" 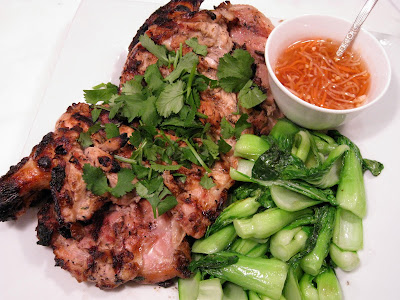 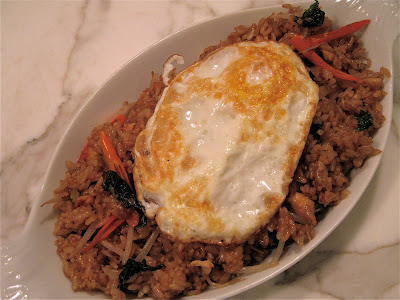