Yesterday, my sister asked me what I made for dinner last week.  I could name the last two meals, but beyond that, I said, hey, haven't you been reading my blog?  This is partially why I started to blog.. I can't keep track of my own cooking.  There's been a few dishes over the years that I wish I had written down exactly how I made it.   My most memorable meals are the ones where the bliss on a persons face makes you want to get back in the kitchen and cook them something else.  Our friend Jeff always made me happy to cook for him.  I remember this veal chop being one of his favorites.  Jeff and family now live in so-cal, so Jeff, we toasted to you tonight.  Was it as good as the original? 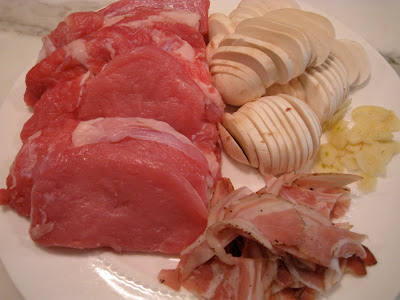 I purchased two veal rib chops along with two packages of veal neck bones to make a stock.  Remove the the bones from the two chops and pound the chops to your preferred thickness.  You can also buy the prepared scallopini which is usually made from the top round cut.  I like to prepare my own as I like it not as thin as the regular scallopini you get at the store.  Makes it easier to cook.. the store scallopini I find cooks almost instantly and I like to get a little more of a sear on the outside.
For the stock, I seasoned the neck bones and browned them in olive oil on medium high in a large sauce pan.  Remove the bones and add in a mirepoix of carrots, celery and onion.  Once the mirepoix is softened, add the bones back in and cover with water.  I added about 3 cups.  Let simmer, covered, for about 90 minutes.  Remove the bones, strain out the mirepoix and return the broth to boil and reduce slightly.  As I was not going to use all of this tonight, I got out a couple of ice cube trays to freeze the rest of the broth in small portions to use when needed. 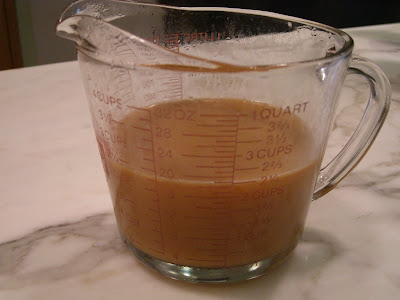 For the veal, remove from the refrigerator about 15 minutes before you are ready to cook.  I like it a little cool as they are thin and will cook more quickly than a regular chop or steak, so this will help achieve a medium rare center.  Cut your pancetta into 1" lengths and fry in a large frying pan until crisp.  Remove the pancetta and keep enough of the oil to just coat the pan.  I used applewood smoked bacon in the original recipe, but since I had this leftover pancetta from last week, I decided to try it.  Season the veal lightly with salt and pepper and sear on medium high flipping once, about 2-3 minutes per side.  The pancetta winds up adding a lot of salt to the sauce, so don't over season.  Remove the veal and add thinly sliced garlic, about two cloves and sliced mushrooms and cook until softened.  Add back the pancetta and the veal stock.  The amount depends purely on how much sauce you like; we like a lot!  Bring to a boil and add in, you guessed it, a splash of cream.  Oh my holy cow, I went to the frige and there was no cream to be found.  I accused Chris of drinking the rest of the cream.  I start to consider what else is in the house.  Marscarpone... that will do.  No need to reduce the sauce now, it is perfectly thickened.
I served this with gnocchi I had made a few weeks ago which I had frozen.  The gnocchi deserves a separate posting, but suffice it say, home made gnocchi was a revelation.  The first time I had home made gnocchi was at my friend Lisa's house.  She comes from a large Italian family and I knew I would not be led astray.  You start to think you cook a lot and have made a lot of stuff, but there is always something else.  Even if you've done it before, there's always another secret to be learned.  I love eating at other people's homes because everyone has their own secret ingredient to share. 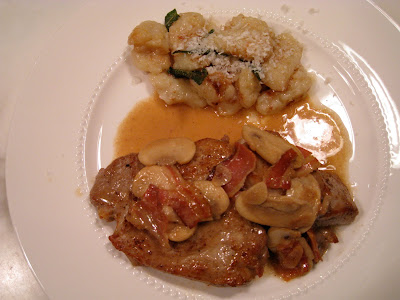