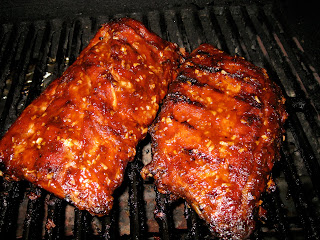 Stella made a request for ribs tonight.  It's one of my favorites too!  I seasoned the ribs in my own rub mixture of salt, garlic salt, brown sugar, chili powder, onion powder and pepper.  There are a few different ways in which I've cooked my ribs, but tonight I used our gas Weber grill.  I soaked some hickory chips earlier in the afternoon and put them into a foil packet pierced with holes.  I turned on only half the grill and placed the packet on top.  The grill was kept at a temp of around 300  and the ribs sat on the side with no flame to be cooked with indirect heat.  After an hour on the grill, I brushed them with a doctored bbq sauce. 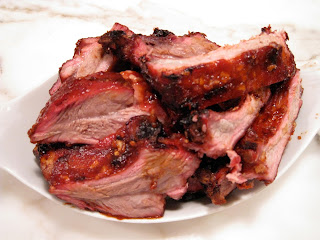 My favorite bottle sauce is Sweet Baby Rays.  To that I added ketchup, honey, garlic, onions, and red wine vinegar.  Flip once and brush the other side and about 10 minutes before you are ready to take them off, flip again and brush the top side again.  A total of two hours on the grill.  They are sweet and tangy, tender, but still maintaining their meatiness without being mushy soft.  We sat down and put our napkins on to feast! 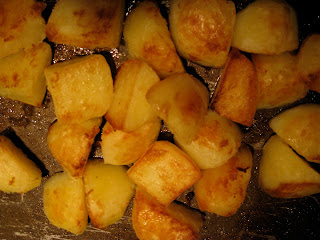 Stella describes these potatoes as french fries, but with bigger insides.  The first time I had these was at my sister's house.  She made them using lard, which is how I'd been making them until tonight.   Peel and cut yukon gold potatoes and boil until just tender.  Heat fat on a baking sheet in the oven at 440 degrees until hot.  Add potatoes and salt and bake flipping potatoes every so often.  The potatoes become crispy on the outside and light and fluffy on the inside.  We decided the lard was better than the duck fat.  I thought perhaps this batch of duck fat I had in my freezer was not as duck tasting as that which I've used in the past.  I've made duck fat french fries before and they were outrageously decadent.  I will have to experiment further.. poor me!  For those of you poo pooing all this talk about fat... here's some interesting details I copied from Bon Appetit .
Butter: 1 tablespoon contains 100 calories and 12 grams of fat, of which 50% is saturated and  30% is monounsaturated.

Duck fat: 1 tablespoon contains 115 calories and 13 grams of fat, of which 33% is saturated and  50% is monounsaturated.

Olive oil: 1 tablespoon contains 120 calories and 14 grams of fat, of which 14% is saturated and  77% is monounsaturated.
Go ahead, live a lot and have a little fat.
Email Post
Labels: This Little Piggy