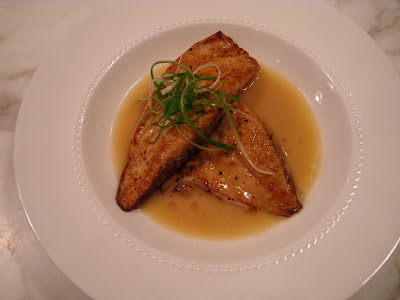 The other day when I went to get my fish for Chinese New Year, I was told to try the Golden Pompano which was a fish they had not carried before.  My man behind the counter told me he was going to bring home two for himself.  So, I bought one, but then gave it to my mom.  I've been thinking about how that Pompano would taste.  Today, it's February yet feels like spring here in Seattle.  I decided to go back to Uwajimaya and pick up another one.  I cleaned and filleted it.  Note to self, do not clean the fish in front of your kids before you are about to serve it to them. 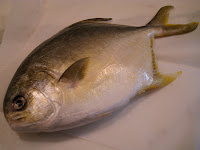 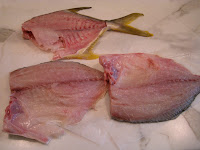 It turns out that one fish, once filleted, is not that big.  Fortunately, I had made the mistake of making it an educational experience for my girls, and when I was finished, they took a pass on the fish.
I seared the fish in canola oil then made a broth out of chicken broth, a bit of soy and a couple pads of butter.  As Chris said, "I like this fish thing, let's do it again." 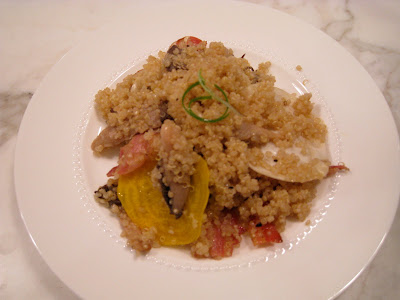 A few weeks ago we had dinner at Restaurant Zoe with some friends.  We ordered their Quinoa salad.  I had never had, nor made quinoa before, but I LOVED it!  Their menu describes it as Quinoa, black trumpet mushrooms, duck confit, shaved root vegetables and citrus emulsion.  I did not find trumpet mushrooms or duck confit, so a couple substitutions had to be made.  I cooked the quinoa as directed on the back of my Bob's Red Mill Organic Quinoa package.  Let cool.  I sauteed oyster mushrooms in olive oil, then cooked Salumi pancetta, very thinly sliced and cut into sections.  For the root vegetables, I used celery root, parsnip and golden beet.  To slice them transparent thin, I used a mandoline that I inherited from a friend  (thank you Lisa & Jim!).  For the citrus emulsion, I put fresh squeezed orange juice, lemon juice, champagne vinegar, honey, soy, one small garlic clove, and a tablespoon of minced shallots in a blender.  Once well combined, I added olive oil until it became an emulsion.  I combined everything and added the citrus emulsion to taste with some freshly ground pepper.  I missed the duck confit, but the salty pancetta made a very fine stand in.
Email Post
Labels: Seafood