My current two favorite pasta sauces are results of two dinners we had at two different homes.  I've been making these a lot over the fall and winter and as we head towards spring, I thought I should give it one last go.  Both of these freeze well and in fact taste better reheated the next day.  The next day improved flavor is true for many sauces and soups.  I think it intensifies the flavor and in sauces like these, lets you easily skim out the fat once it's hardened.  Since these both have similar preparations, I decided to make both at the same time. 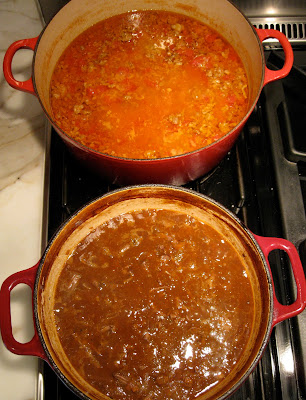 My brother in-law made a bolognese sauce several years ago that he cooked for hours using fresh tomatoes.  It was delicate and delicious.  My subsequent versions have always been heavier and more brutish.  I love those sauces as well, but have come to realize that just because it's a meaty bolognese, does not mean it should not be subtle and light - well, as much as a meat sauce can be.
I tried a new recipe today. Yes, I have an actual recipe for you!  It is  Marcella Hazan's Recipe for Bolognese Meat Sauce. A friend gave me Hazan's cookbook when I inquired about homemade pasta she had made.  I will definitely post about the homemade pasta revelation later.  The recipe link above does not go into the detail Marcella does in her book, but the measurements are accurate. And since I am too lazy to type it all out, I googled and found this one.  I tripled her recipe because instead of ground beef chuck, I had already purchased one package each of organic ground beef, ground veal and ground pork.  This is the combo I usually use for my bolognese.  I made the sauce as directed, but wished there was a photo.  It is very hard for me to follow a recipe as I become a slave to it, questioning every move.  For all the cookbooks I have, I follow very few recipes.  I like to look for ideas and answer questions on a particular method, but for the most part, I love to wing it and trust all will be okay.  But once in a while, it is educational to follow something to the tee.  After all, she has a book.  I do not!  My biggest question is, whether to skim off the fat that rises to the top.  The last words of her recipe says that the fat should separate from the sauce, and that's it.  I posed this question to Chris and he said, 'no way, that's my favorite'.  The bolognese was fabulous.  Meaty, but not overpowering.  I went with a pappardelle noodle.  My favorite brand is De Cecco.  I could smell the eggs as the pasta was cooking.  7 minutes to perfection! 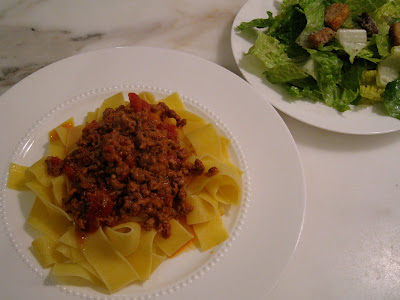