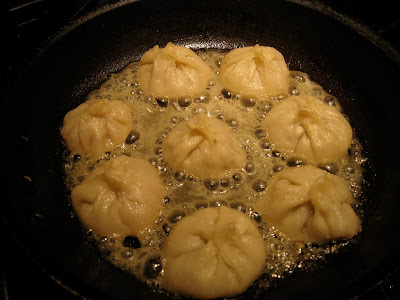 As I've been contemplating my next Xiao Long Bao experiment, my mom gave me a great idea on what to do with the dozens of frozen ones I've already made. Since I have not yet achieved that perfect dough for keeping in the broth of the dumpling when steaming, she suggested cooking them in the same way I do Kuo Tien. A bit of oil on the bottom of the pan, lay the frozen Baos on top, add water, cover and boil until most of the water has evaporated. Uncover, let rest of the water cook off and allow the bottoms of the Baos to crisp and brown. I always use a non-stick pan, though if you have a well seasoned cast iron pan that you trust, that would work well too. This way of cooking them results in a slightly stronger, more taut shell.
Email Post
Labels: Chinese Dumplings and Rolls